General Hospital Spoilers: Is Evil Nikolas Cassadine Brainwashed or an Impostor – Did Helena Plant a Brain Chip in Grandson? 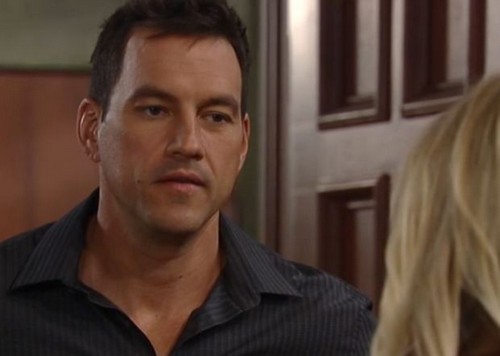 General Hospital spoilers examines the truth behind Nikolas Cassadine’s migration to the dark side of Cassadine behavior almost overnight. We’ve all noticed that Nikolas Cassadine (Tyler Christopher) is not himself lately. Strangely, and for once, he seems like a true Cassadine. He ordered a hit on Hayden Barnes (Rebecca Budig), is keeping Jason Quartermaine’s (Billy Miller) identity secret which is hurting many people that Nik cares about, and is generally being an all-around bad guy and douche-bag.

Nik has always been a disappointment to his evil grandma Helena Cassadine (Constance Towers) because he didn’t follow in her and other bad Cassadines’ footsteps. So could Helena have had enough of his annoying niceness and done something about it? Helena had no problem putting a chip into Jason’s brain. Would she balk at putting one into her grandson Nik’s brain? I think not.

It’s very likely that Helena did put a device into him or brainwashed him to be evil. But here’s the thing, it seems that Helena has lost control of her evil experiment. Nikolas has definitely exiled her to Cassadine Island – we saw him order her there, we have seen her there, and seen her confirm with Luke Spencer (Anthony Geary) recently that she is, in fact, in exile.

That’s really the best explanation for what is going on with Nikolas. He’s always been a pretty ethical guy and now he’s turned into the worst possible jerk in Port Charles and all within the past six months. When did it all start? When Nikolas showed up for the party on the Haunted Star and Helena and her goons turned him away because she knew about the bomb on the boat.

When Nik protested, the goons knocked him out. That would have presented Helena the perfect opportunity to tinker with her goody-goody grandson’s brain whether she brainwashed him or put in a chip that has now gone a bit haywire. Some other theories are that Nik is locked away somewhere in the bowels of Wyndemere and that’s an impostor wrecking havoc on Port Charles (that notion seems like a stretch).

Alternately, Helena may have had control of Nikolas but then another Cassadine took over the remote control and had Nik lock Helena up on the island to get her out of the way. Victor Cassadine (Thaao Penghlis) was shot by Liesl Obrecht (Kathleen Gati) then blown up in a lab explosion, so he’s not a likely candidate. But who is a possible culprit is the heretofore unseen Valentin Cassadine.

He is the likely biological father of Nathan West (Ryan Paevey) – not Victor – and it was to keep that secret that Liesl shot Victor. Valentin is supposedly the most evil of them all which would be no surprise as the illegitimate son of Mikkos Cassadine. As a disinherited Cassadine, he would have a monstrous grudge against evil Helena and against Prince Nikolas who had all that he was denied. How exciting would it be if the evilest of the Cassadines, Valentin, is responsible for the corruption of the best of the Cassadines, Nikolas.

In any case, Valentin or no Valentin, there is no question that Nikolas Cassadine has gone from being an intelligent and considerate fellow to a Machiavellian monster who apparently will stop at nothing to achieve his goals. Sudden changes in character as sweeping as Nicholas’ do not occur in any but the mentally ill – so we maintain that there must be more to this story here than a simple amping up of Nik. Nikolas is NOT Nikolas – stay tuned to CDL for more on what is really behind Nikolas ostensibly turning evil while we bring you tons more “General Hospital” spoilers, gossip and casting news.