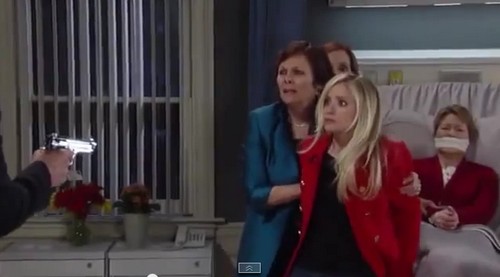 Check out these “General Hospital” spoilers for all the goings on in Port Charles on the Tuesday, March 31 episode. Hopefully we’ll get a little resolution on at least some story lines on Tuesday’s show – but then again, maybe not – since we have the big 52nd anniversary show coming tomorrow on April 1.

Now that Franco (Roger Howarth) and Nina Clay (Michelle Stafford) have extorted Olivia Falconeri (Lisa LoCicero) to give them a luxury suite, it looks like those two will be living large at the Metro Court. But then Carly Corinthos (Laura Wright) comes upon them and freaks out when she hears the two nut jobs are getting comped. Bad enough she has to look at her ex-fiancee who almost ruined her relationship with her son Michael Quartermaine (Chad Duell) but now he’s staying free in her hotel!

To be fair, it was (as usual) Carly’s own fault that Michael felt betrayed because she did pick Sonny Corinthos (Maurice Benard) over him yet again. But I digress… Carly will demand to know why Olivia is letting Franco and Nina crash there and Olivia will have to scramble because she can’t tell Carly about Julian Jerome (William deVry). Olivia will likely make up some nonsense about Nina being Nathan West’s (Ryan Paevey) sister and him being her son Dante Falconeri’s (Dominic Zamprogna) partner and it’s a favor or something equally silly. Carly will let it drop for now.

Hayden Barnes (Rebecca Budig) will push Jake Doe (Billy Miller) to head back home to their fake home – that’s the only way she’ll get the rest of her cash from Ric Lansing (Rick Hearst). But not only did Carly tell him not to go with her, Commissioner Sloane (Grayson McCouch) made it clear he needs to fulfill his obligations to their deal. Jake will push back on an unhappy Hayden and will start his job for Julian.

But will Jake actually rat on Julian since he has a friendship with Sam Morgan (Kelly Monaco)? “General Hospital” spoilers indicate that Jake has vivid flashbacks of a life with Sam including time spent with her in Hawaii. He may think these are just dreams at first, but Jake will start to get twinges that have him thinking hard about Sam and moving farther from fake wife Hayden but perhaps also from Liz.

Jake will keep this to himself (he may tell Carly) because Patrick Drake (Jason Thompson) did save his life with that harrowing brain surgery so trying to poach his babe Sam would not be cool. Plus to complicate all of this, Sam and Patrick are getting more serious. Julian and Sam will have a talk about commitment and he’ll tell her that he asked Alexis Davis (Nancy Lee Grahn) to move in and she’ll tell him Patrick asked her the same thing. Julian will offer some advice that will get Sam to agree to move forward with Patrick – but this will only make it all harder later when Jake is revealed as Jason.

Meanwhile, Alexis has a question for Patrick – she wants to make sure there wasn’t a nip slip when he and Sam walked in on she and Julian in flagrante delicto. Also in Patrick land, Elizabeth Webber (Rebecca Herbst) will tell Patrick about Hayden and her doubts and confusion about Jake’s “wife.” They’ll talk about her feelings and Liz will be feeling vulnerable. Ric will be so pleased that his plan is working and he assumes that Hayden will soon have Jake out of town that he goes to see Liz. He’s hoping she’ll be brokenhearted and won’t be happy that Jake is sticking around and Carly is encouraging Liz’s interest.