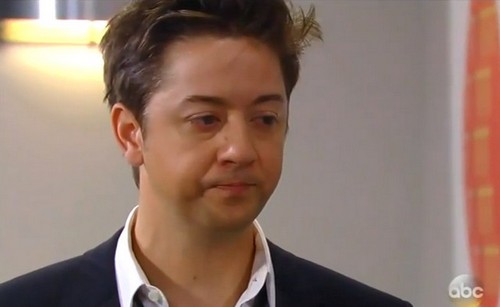 Robin Scorpio-Drake – In December Kimberly McCullough tweeted that she was on the set of ABC’s General Hospital and sent social media in to a frenzy that her character was returning, however so far no one from the soap has confirmed nor denied that the actress was actually filming scenes so Robin’s big return remains a mystery. Furthermore there are rumors that Robin might be returning pregnant, possibly from an IVF with Lulu’s stolen embryo.

Detective Sloane – Despite the sparks flying between Sloane and Port Charles Police Commissioner Anna Devane on New Years, General Hospital coming and goings have confirmed that the character is not sticking around and will be exiting just as quickly as he arrived. Actor Robb Derringer confirmed the news on social media and reported that he has completed filming on GH.

Sonny Corinthos – Rumors were flying that Sonny Corinthos was exiting the ABC soap and Maurice Benard was quitting after issues with his contract. However, the actor confirmed in an interview with Soap Opera Digest that after lengthy negotiations he and TPTB at General Hospital had finally found common ground and the character of Sonny Corinthos was sticking around.

Damian Spinelli – Bradford Anderson made another brief appearance on General Hospital during the holidays when Maxie Jones finally got to see her daughter Georgie. Rumors are flying that Spinelli will be back on the soap’s canvas for good, and Anderson has teased in interviews that he is “itching to get back to work.”

Bobbie Spencer – According to January 2015 coming and going news for General Hospital, Jacklyn Zerman will be back on the canvas during the month of January. Although Bobbie and Franco’s dad are done dating, General Hospital spoilers tease that she will have some scenes coming up with her brother Luke Spencer’s impostor Fluke.

So GH fans, are you happy that Sonny Corinthos is sticking around General Hospital? Could you imagine the show without him? How do you think they will tie Robin’s return in to ongoing storylines, or is she not returning? DO you think Spinelli will be back for good? Let us know what you think in the comments below and don’t forget to check CDL tomorrow for more General Hospital spoilers and news.