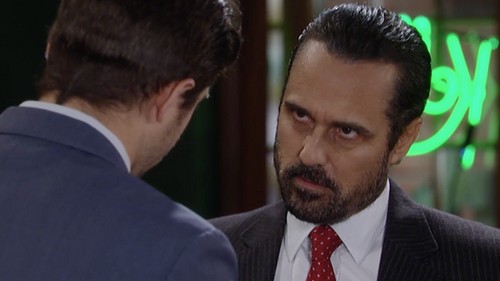 Here are some hot “General Hospital” spoilers for your favorite ABC soap for the week ending March 6. Jaws dropped today when a new judge took over the Avery Corinthos custody case. Yep, Michael Quartermaine (Chad Duell) was able to use some family influence to get the sympathetic lady judge booted and get Judge Walters (William Allen Young) assigned to the case. In case you don’t recognize the good judge, here’s a reminder of who he is and why his presence in the courtroom spells bad news for Sonny Corinthos (Maurice Benard).

#1: Walters has no problem blocking biological parents from their kids. If you remember, Judge Walters was extremely (even excessively) hard on Maxie Jones (Kirsten Storms) when she was trying to just get visitation rights for Georgie Spinelli (Harper Rose Barash). She wasn’t even trying to get custody and he was way harsh.

#2: Walters is dating Monica Quartermaine (the rarely seen Leslie Charleson). Yep, he’s the (presumed) lover of Michael’s grandma who just happens to be the mom of AJ, the guy Sonny (supposedly) killed.

We can expect when the verdict comes down that Judge Walters will hand baby Avery to Michael Q on a silver platter. The real question is whether Walters will not only strip Sonny’s custody but threaten to send him back to jail. I’m sure Sonny is on parole for something or there’s some criminal charge he can use to slap him back to Pentonville. Walters may likely even deny Sonny visitation of his daughter.

Meanwhile, little darling Avery is with Morgan Corinthos (Bryan Craig) at Ava Jerome’s (Maura West) memorial, but guess who’s also at Ava’s memorial? Ava! The big question is, will Ava snatch Avery when no one is looking? And will she be caught baby-snatching by Silas Clay (Michael Easton)? Silas knows Ava saw the text from Kiki Jerome (Hayley Erin) that Morgan was bringing the baby.

Ava lurked and waited for everyone else to leave before revealing herself to her mom, Delia Ryan (Ilene Kristen). I have no doubts that Delia would hand Avery over to Ava and cover for her darling Ava as she makes a getaway with her infant. Rumors are swirling whether the custody verdict may be made moot if Ava runs off with little Avery. Silas will likely stop her, but it may be too late and the secret of Ava’s survival may be out!

And speaking of gangsters… now that Julian Jerome (William deVry) has thrown down the gauntlet to re-ignite the Corinthos vs Julian mob rivalry, it’s interesting that Commissioner Sloane (Grayson McCouch) is planning on sending Jake Doe (Billy Miller) undercover into the Julian crime family as a spy. Since Jake is so close to Carly, he can give Carly inside info to pass on to Sonny and also warn Carly about anything Sloane might be up to regarding Sonny. Could be fun.

Meanwhile, over in Cassadine-land, we saw Nikolas Cassadine (Tyler Christopher) struggling not to tell Sam Morgan (Kelly Monaco) who Jake is. Before he can break down and admit the truth (or invent another lie), Nikolas is called back to check on Spencer Cassadine (Nicholas Bechtel) whose blood pressure was dropping because of pain medication. Sam leaves Shriner’s Hospital with no answers.

Also this week, expect developments on the Damien Spinelli (Bradford Anderson) and Maxie front, including a kiss that Nathan West (Ryan Paevey) will see and won’t be happy about. We’ll also see some progress on the Luke/Fluke (Anthony Geary) storyline and Franco (Roger Howarth) and Nina Clay (Michelle Stafford) will start plotting to make trouble once they can get out of Shadybrook.

So much is going on at GH these days – so many exciting story lines – so many cliffhangers. Check back with CDL every day for tons of “General Hospital” spoilers, rumors and casting news.