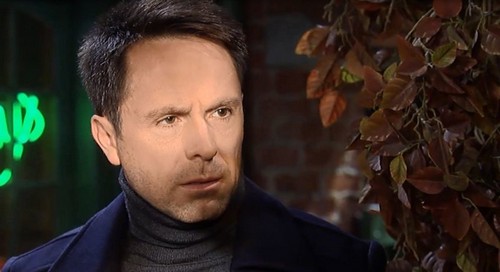 Here are some hot “General Hospital” spoilers for your favorite ABC soap for Tuesday, March 3. Well Monday was an ugly day in court for Michael Quartermaine (Chad Duell). Ric Lansing (Rick Hearst) pretty much did nothing but attack Michael while Sonny Corinthos (Maurice Benard) hid behind his beard feeling guilty (as he should) for all that Michael went through as a child. Rumor has it that the judge will rule soon in the custody case, perhaps even this week.

However, there will be an unexpected visitor to the courtroom. So let’s explore some rumors about who it could be. Ava Jerome (Maura West) is back from the dead and doesn’t want Sonny or Carly Corinthos (Laura Wright) to raise her baby – but Ava is physically too weak to make it to court plus there’s the whole murder-fugitive thing hanging over her head.

So… what we do know is that Kiki Jerome (Hayley Erin) will reach out to Silas Clay (Michael Easton) to tell him something. There was a question about baby Avery’s paternity so could it be that Kiki will reveal to her dad that her sister is actually Morgan Corinthos’ child (Bryan Craig) and not gangster Sonny’s? That would certainly shake up the custody hearing.

And Jake Doe (Billy Miller) has a lot to think about. Elizabeth Webber (Rebecca Herbst) offered herself up on a silver platter (emotionally at least) and Police Commissioner Kyle Sloane (Grayson McCouch) also made Jake an offer. This second one was one of those “offers you can’t refuse.” Jake will get out of jail Scot-free so long as he goes undercover in the Jerome crime family for Sloane. I’m just spit balling here, but I’m guessing Jake will feel right at home in a crime syndicate, right? Jake will consult Carly about an important decision – spoiler alert – he won’t tell her about Elizabeth’s confession, but may ask her advice instead about Sloane’s deal.

Franco (Roger Howarth) confessed to Nina Clay (Michelle Stafford) that he was putting on a piece of performance art (lying, in other words) that he was still jacked up on LSD. Nina rants a bit but then shuts up when they make out. The two of them are plotting but that’s not quite enough crazy, right? GH spoilers reveal that the two of them will partner up with someone else to make trouble.

Could it be Luke Spencer (Anthony Geary)? Since we all know Fluke/Luke is bat crap crazy, it seems like Shadybrook is where they should send him instead of Pentonville. Like it or not, the man is certifiable (all three or four of his personalities). And here’s a fun rumor that’s twisted and very likely untrue. There’s been talk on the interwebs that long-lost Spencer big sister Patricia could actually be Helena Cassadine (Constance Towers). They’re the right age (give or take) but Helena has been flirty with Luke over the years so that rumor just makes my skin crawl. The more accurate word around Port Charles is that they’re in the process of casting the role of Patricia Spencer now. But it’s fun to think about Helena being a Spencer, isn’t it? (Just for a moment before it makes you queasy.)

Today Julian Jerome (William deVry) will head over to the Quartermaine manse to threaten Michael not to use baby Avery, his beloved niece, as a tool of revenge. If Ned Ashton (Wally Kurth) overhears Julian threatening Michael, it could reinforce his insistence that he should continue playing baby daddy to Olivia Falconeri’s (Lisa LoCicero) baby. Speaking of Olivia, she’s got to head over and confess to son Dante Falconeri (Dominic Zamprogna) that she’s knocked up by yet another gangster.

Also look for Damien Spinelli (Bradford Anderson) to make a grand gesture to try and win Maxie Jones (Kirsten Storms) back. Soap Opera Digest’s poll currently has the vote going 67% for Nathan West (Ryan Paevey) and 33% for Spinelli. Are those voters shallow or what? Give me the hacker nerd any day but then again, I heart geeks. #Spixie for life!

All kinds of edge-of-your-seat stuff is happening in Port Charles right now. Wish they had more than 60 minutes to explore all these awesome story lines. Be sure to check back with CDL every day for more “General Hospital” spoilers, rumors and casting news.