‘General Hospital’ Spoilers: Lulu and Dante Both Cheating, Marriage Over – Does Lulu Sleep With Dillon? 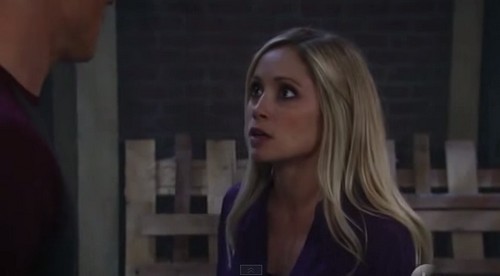 “General Hospital” spoilers reveal that one of the most stable relationships in Port Charles is blowing up and may be done soon. Show runner Frank Valentini admits he wanted to put Lulu Spencer (Emme Rylan) and Dante Falconeri (Dominic Zamprogna) through some trials since they haven’t had any drama in a while. But with both Dante and Lulu cheating, will these two be done for good?

Dante is warming up to make some sparks fly with Valerie Spencer (Brytni Sarpi) as they sit watching the July 4th fireworks. They’re conveniently on the bed when Val starts bawling about her dead mom and Dante’s certain that Lulu has been banging Dillon Quartermaine (Robert Palmer Watkins). They start out holding hands and comforting each, but things will heat up from there.

Last time Dante put the moves on her, Valerie put the brakes on, but she may not this time since she’s sure Lulu is cheating and she really likes Dante. Whether they seal the deal and get carnal or not, Lulu will definitely feel betrayed, but here’s the thing – Lulu is cheating too! Before you shout that Lulu and Dillon have not gotten naked, that much is true. But there is more than one kind of unfaithfulness.

While Dante is dipping into sexual betrayal, Lulu is actively engaged in emotional cheating. Lulu could have told Dante the truth about her brother Lucky Spencer’s (Jonathan Jackson) kidnapping, but she decided to trust Dillon instead. That’s Lulu choosing to be unfaithful in her trust and emotions and, you could argue, is almost as much of a betrayal as if she had been doing the horizontal boogie with Dillon.

If Dante does stop before he goes all the way with Valerie, he may feel that he did less cheating than Lulu. His wife, however, will not feel that way and will think Dante’s betrayal was much worse. It’s the disagreement over who betrayed whom in the more extreme way that could end their marriage more so than either of them getting naked with someone else and/or telling big fat lies.

Based on what’s going on now, there are a couple of scenarios that could play out…

#1 Valerie turns up pregnant with Dante’s baby
This would be awesome. If Valerie and Dante go ahead and consummate their budding relationship, Valerie could get preggers which would drive Lulu crazy since she’s had so many infertility issues. Dante would be thrilled since he loves kids. This would also be interesting since a ValDante kid would create a permanent source of friction in Dante and Lulu’s marriage even if they manage to stay together.

#2 Lulu sleeps with Dillon
Lulu could be so heartbroken over Dante philandering with her cousin Valerie that she goes ahead and does the naughty herself. Dillon would likely be down for some revenge nookie with Lulu. It could be fun if she also got pregnant but after the Cassadines froze her, it seems like an impossibility for Lulu to get pregnant, but with GH you never know! They may bring her ovaries back from the dead.

And if Valerie does get knocked up by Dante, you can’t imagine that Nikolas Cassadine (Tyler Christopher) will let her stay on at Wyndemere. If she’s out of a place to live, would Valerie end up with Dante? Would Lulu move in with Dillon at the Q mansion and leave the loft to Dante, Val and their baby? Where would little Rocco end up? This is a hot mess that’s going to be amazing to watch unfold and play out. Can’t wait!