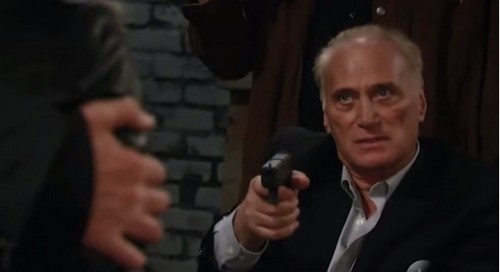 It’s Independence Day in Port Charles – here are some “General Hospital” spoilers for the Friday, July 3 episode. Kiki Jerome (Hayley Erin) enjoys a day in the park with lover Morgan Corinthos (Bryan Craig) but things won’t go the way she wants for long. Kiki brings up Denise DeMuccio (Maura West) and Franco (Roger Howarth) and Morgan wants to know if they’re done but Kiki won’t like how interested he is in the subject matter. Maybe Franco was right and Kiki has something to worry about.

Dante Falconeri (Dominic Zamprogna) is upset, certain that Lulu Spencer (Emme Rylan) is cheating on him and he pushes Valerie Spencer (Brytni Sarpi) for more comfort than a friend would give – Dante wants friends with benefits action. Valerie is ready to give in to their attraction when Maxie Jones (Kirsten Storms) and Nathan West (Ryan Paevey) show up and interrupt their sexy time.

Dante and Lulu’s drama is also a topic of discussion over at the Corinthos place. Carly Corinthos (Laura Wright) notices that Sonny Corinthos (Maurice Benard) is babysitting baby Rocco and wants to know why. Carly senses something is off and asks what’s up with Dante and Lulu. Carly won’t want to believe that Lulu is cheating but Sonny tells her that Dante seems pretty sure.

Also at the park, Molly Lansing-Davis (Haley Pullos) enjoys an outing with TJ Ashford (Tequan Richmond). Molly wants to know if he moved in with her Uncle Sonny just to piss off Jordan Ashford (Vinessa Antoine). TJ may admit that was part of it, but being with Sonny makes him feel closer to Shawn Butler (Sean Blakemore). TJ also has a special gift for Molly.

Up in Canada, Luke Spencer (Anthony Geary), Laura Spencer (Genie Francis), Holly Sutton (Emma Sams), Ethan Lovett (Nathan Parsons) plus Lulu and Dillon are there. They are all surrounded by the henchmen, but then the master kidnapper is revealed. “General Hospital” rumors have it that it could be another Smith family mob member, but aren’t all of them dead except for Jennifer Smith (Holly Gagnier)?

Is Frank Smith (Mitchell Ryan) back from the dead? Or was Damian Smith (Leigh McCloskey) not really a crispy critter compliments of Justus Ward (M’fundo Morrison)? What we do know is that Luke and Laura are stunned to see who it is and don’t believe it which makes it believable that it’s a blast from Luke’s troubled and violent past.

Franco and Denise are far from over, but what is it that they will be as a couple? A couple of friends? A couple of troublemakers? Or will Franco play nice with Denise but stick close so he can keep an eye on her and make sure she and Morgan aren’t fooling around and set to hurt Kiki’s feelings? Franco does not appreciate cheaters and we know how he likes to publicly expose them. Denise better watch out.

Don’t miss a moment of Friday’s cliffhanger and holiday special then head back to CDL for tons more “General Hospital” spoilers, gossip and news.

The General Hospital video preview for Monday July 6 reveals that Frank Smith is the blast fro the past kidnapper!