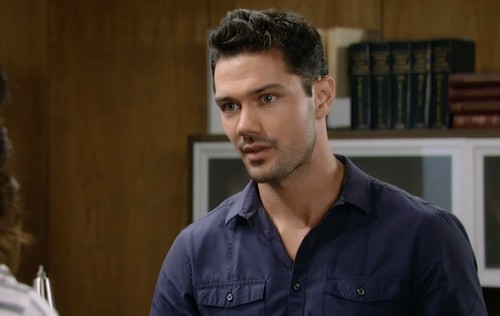 Tons going on in Port Charles – check out these “General Hospital” spoilers for the Thursday, July 30 episode. Madeline Reeves (Donna Mills) finds a volatile Franco (Roger Howarth) in Nina Clay (Michelle Stafford) and Ric Lansing’s (Rick Hearst) room at the MetroCourt. Maddy demands to know why he’s there and Franco will go off on her and accuse her of conspiring with Ric to hurt Nina. If Franco spots the blanket, he’ll have a good idea that they’re doing some scheme involving baby Avery.

Did Ric take Nina to Shadybrook? They’re somewhere that Nina isn’t happy to be and she tells Ric she doesn’t want to be there. Ric claims he wants to get her help, but Ric just wants Nina out of the way so he and Maddy can steal her money and keep fooling around behind her back. Will Nathan West (Ryan Paevey) and Franco figure it out in time to save Nina from this terrible plot?

Also, Silas Clay (Michael Easton) goes off on a naked Morgan Corinthos (Bryan Craig) and Ava Jerome (Maura West). Silas will threaten to tell Kiki Jerome (Hayley Erin). What we know now is that Easton has left the show and Silas’ days in Port Charles are numbered. Silas won’t die today (likely) but he may be offed by Ava soon if he doesn’t keep his mouth shut about who she really is.

We also know that Silas has more scenes coming with Nina where they discuss the kidnapping. But when it’s time for Silas to kick it, will it be Ava who takes him out and then her boy toy Morgan will help her hide the body? There have been “General Hospital” rumors of a major male character killed off so now we know it’s Silas, it’s just a question of when.

Scotty Baldwin (Kin Shriner) wants some answers from Nikolas Cassadine (Tyler Christopher) about how he got all that ELQ stock and whether he committed fraud to take over the company. Don’t expect Nik to be too forthcoming and if push comes to shove, Nik can always turn to Mayor Lomax to get Scotty to back down.

Laura Spencer (Genie Francis) stops by Liz Webber’s (Elizabeth Webber) on the pretense of seeing little Jake Spencer (James Nigbor) but, in fact, Laura is there to grill Liz and put her on the spot about Jake Doe (Billy Miller). Laura says Jake looks familiar just to watch Liz squirm. Laura wants Liz to come clean so that little Jake can have his dad. Will Liz cave and come clean?

Sonny Corinthos (Maurice Benard) gets word that his organization has been hit again and he’s ready to get serious and pull in some outside resources to find out who is behind the attacks. And this trouble is ill-time since Kristina Corinthos (Lexi Ainsworth) is headed back to Port Charles to reprise the mob princess role.

Also interesting is that Teresa Castillo (aka Sabrina Santiago) is pregnant – that’s why Sabrina has been hiding behind pillows and billowy tops. The big question is whether new lead writers Jean Passanante and Shelly Altman will write the pregnancy in and she and Michael Quartermaine (Chad Duell) can have a Quartermaine kiddo to replace the hole in their life that baby Avery left.