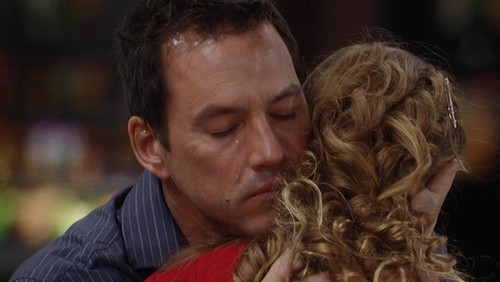 Here are some “General Hospital” spoilers for the ABC soap for Wednesday, February 25. Yesterday, we saw a post-coital Alexis Davis (Nancy Lee Grahn) tell Julian Jerome (William deVry) that she’s thinking about Ned Ashton (Wally Kurth). Then Alexis clarifies that she was thinking about Olivia Falconeri’s (Lisa LoCicero) baby. The upshot was that Julian is ready to let it go and accept that Ned is the baby-daddy.

But Alexis is absolutely not ready to let it go – not for a moment. If you remember, Ned also lied when Alexis was preggers by Sonny Corinthos (Maurice Benard) and said he was the father to protect her little one from Sonny’s mob lifestyle. So why would he think to do it again. Julian says Ned isn’t stupid enough to try it again. (Sure he is). Expect to see Alexis lurking around the hospital, listening in on conversations and trying to catch Ned and Olivia in a lie.

Sam Morgan (Kelly Monaco) comes to see Jake Doe (Billy Miller) at the hospital and she asks him about the ring comment he made before he went into surgery. He says he doesn’t remember. But remember, Nikolas Cassadine (Christopher Tyler) has Jake’s (aka Jason’s) wedding ring on him because he was looking at it before Patrick Drake (Jason Thompson) showed up.

That means it’s likely still on him and he’s headed to the hospital on today’s episode because of the fire and Spencer Cassadine (Nicholas Bechtel) getting hurt. Will Nikolas drop the ring while he’s in the hospital waiting room and someone will find it? Or (more likely) will he be overwrought with guilt and contrive a way to drop it in Jake’s room while the amnesiac is sleeping? Maybe Nikolas will slip into Sam’s purse when she’s not looking… What do you think?

Meanwhile, little Prince Spencer Cassadine is in deep trouble. Looks like he inhaled a lot of smoke in his birthday party blaze and it looks like he’s not breathing. Patrick will do CPR but rumor has it that Spencer could have some medical issues and may not come out of this completely unharmed. Nikolas will ponder his recent actions – getting Helena Cassadine (Constance Towers) off the hook, rigging elections, trying to take over ELQ and, most importantly, keeping Jake’s identity a secret – and wonder if the fire was a karmic slap of some sort.

We can expect Sam to be very concerned about Spencer and come to comfort Nikolas, but will he cave and fess up about at least some of his secrets and plotting? Will Spencer end up in a coma? Will Emma Drake (Brooklyn Rae Silzer) be tormented by guilt over Spencer’s accident? Will Cameron Webber (Michael Leone) realize that he was the one that started the blaze?

And, seriously, will Nicolas realize that he skimped on fire alarms at his Spoon Island mansion? I mean, come on, that fire was out of control and still no alarm. I accidentally overcook a piece of bacon and mine is beeping loudly. What’s up with that? And was no one chaperoning the party? Granted Nikolas said he gave his staff a few days off to recover, but shouldn’t their R&R have begun after the guests left and the event was cleaned up?

Today we should see more on the Sonny and Michael Quartermaine (Chad Duell) conflict over baby Avery and Ava’s memorial planning should start up soon as well. And we’re owed a few minutes of the 12 Faces of Fluke today. Bobbie Spencer (Jacklyn Zeman), Tracy Quartermaine (Jane Elliot) and Lulu Spencer (Emme Rylan) will make a plan to head to the old Spencer homestead to do some sleuthing. And Maxie Jones (Kirsten Storms) will be doing some serious thinking about her sexy cop vs brilliant hacker man dilemma.

And start counting down to the re-emergence of Kiki Jerome (Hayley Erin) with her all new persona. Can’t wait to see how she sails into the role that was so recently left by Kristen Alderson that the body is still warm… Finally, who’s getting excited about the GH Nurse’s Ball – it’s right around the corner! In the Facebook group Soap Opera Spy people are talking about this!

Check with CDL tomorrow for more “General Hospital” spoilers, rumors and casting news about the happenings in Port Charles.