General Hospital Spoilers: Is AJ Quartermaine Still Alive – How Will Sonny Get Out Of Petonville Prison 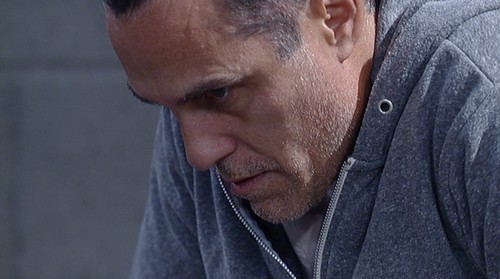 General Hospital spoilers tease that during the month of January GH fans can expect more exciting scenes starring Sonny Corinthos in Pentonville prison, and rumor has it he may run in to a few more inmates from Port Charles. We love this whole Orange Is The New Black theme on General Hospital, but how much longer can Sonny Corinthos really stay in jail? GH fans have been scratching their heads trying to figure out how the writers of the ABC soap are going to get Maurice Benard’s character off the hook for murder.

When General Hospital spoilers first revealed that Sonny Corinthos was going to prison for killing AJ Quartermaine, we expected there to be some sort of loophole to emerge that would get the mobster off Scot-free for the crime. However, so far nothing has turned up – and with a recording of Sonny shooting AJ, the evidence is pretty cut and dry. But, at the end of the day the fact remains that Sonny Corinthos can’t stay in prison forever, so how is he going to get out?

General Hospital rumors have been floating around for quite some time that AJ Quartermaine isn’t really dead and Monica faked his death because she knew he was a sitting duck at the hospital and in danger. If AJ suddenly comes back form the dead – then Sonny would no longer have a murder charge hanging over his head. There is also the chance that Alexis could put on her lawyer hat and come up with an amazing defense claiming Sonny was mentally ill and unaware of what he was doing when he shot AJ, however that doesn’t seem likely since Sonny already pled guilty to the crime.

Another popular theory among GH fans is that it will be revealed that Fluke actually snuck in to the hospital room and finished AJ off, so technically Sonny didn’t “murder him,” he just attempted to murder him. The only problem with that theory is that you still go to prison for attempted murder.

So GH fans, how much longer do you think Sonny Corinthos’s mailing address will be at Pentonville? How will the writers manage to get him out of jail? Is AJ Quartermaine still alive? Will he score some sort of amazing deal with the DA if he snitches on someone else like Johnny Zacchara? Let us know what you think in the comments below and don’t forget to check CDL tomorrow for more General Hospital spoilers and news.