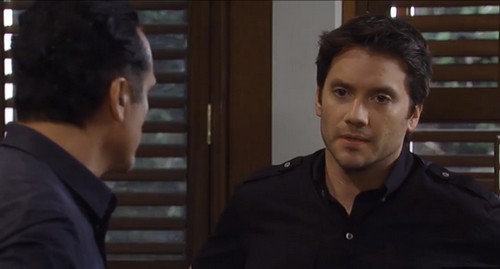 Denise DeMuccio (Maura West) is taking Port Charles by storm – see what she’s up to next in these hot “General Hospital” spoilers for the Wednesday, July 1 episode of the hit ABC soap.

Denise has no choice but to head over to see Sonny Corinthos (Maurice Benard) in order to get access to baby Avery. Sonny will not be happy to see the woman he suspects is really Ava Jerome, killer of his beloved Connie, at his door. Sonny will demand to know why the hell doppelganger Denise is there. Denise will explain she came to see her “niece” and Sonny will let her visit.

But is Sonny’s gesture because he’s feeling warm and fuzzy now that Michael Quartermaine (Chad Duell) gave his daughter back? Or is Sonny going to invite her in so he can take the chance to lecture Denise on keeping her cougar hands off of Morgan Corinthos (Bryan Craig)? Or is Sonny after darker purposes like busting her out as really being Ava then threatening her life? We’ll see.

Denise has other interests, though, two men in particular – Franco (Roger Howarth) and Morgan. She’s trying to keep her hands off of Morgan by putting her hands all over Franco. Unfortunately, it doesn’t seem like Denise can control herself with Morgan so she may have to crank things up a notch with Franco to distract herself more thoroughly.

Denise’s faux-honey Franco goes to talk to his BFF and psycho mentor Dr Liesl Obrecht (Kathleen Gati) for relationship advice. Dr O assumes Franco has come to wail and gnash his teeth over Nina Clay (Michelle Stafford) and her good for nothing hubby Ric Lansing (Rick Hearst). But nope, Franco wants to talk about Denise. Will he ask Dr O about his jealousy plan or the Denise DNA anomaly?

Nikolas Cassadine (Tyler Christopher) certainly didn’t like Jake Doe (Billy Miller) telling him to stick his job offer up his royal rear. But Nik isn’t done catching grief for his evil ELQ shenanigans. Sam Morgan (Kelly Monaco) will find Nik and rail at him over the horrible Cassadine-esque jerk he’s turning into and how he’s getting more evil by the day.

None of this will slow Prince Nik’s role – that guy has so many issues he could start his own magazine. After a second butt kicking, Nik will head home to Wyndemere for some peace and quiet, but he won’t find it. The littlest prince Spencer Cassadine (Nicolas Bechtel) will lay into him for being neglectful, too focused on work and not giving his son the time of day. Preach it, Spencer!

At the Q mansion, Jake feels a sense of deja vu and really likes the vibe of the place. Jake tells Michael that he wants to help him get ELQ back and kick Nik to the curb. Sam will also offer an assist and the three will form a triumvirate that will surely conquer the evil Cassadine heir and put an end to his evil plans (or at least his evil plans for ELQ). Michael will be thrilled at their loyalty and they make plans.

Up in Canada, Dante Falconeri (Dominic Zamprogna) has seen enough and thinks he has all the evidence he needs to confirm that Lulu Spencer (Emme Rylan) is cheating with Dillon Quartermaine (Robert Palmer Watkins). Look for Dante to head back to Port Charles and into the waiting arms of Valerie Spencer (Brytni Sarpi) who’ll comfort his broken heart and ego. They will get closer still.

We saw the photo that the kidnappers sent of bound and gagged Lucky Spencer (Jonathan Jackson) and Ethan Lovett (Nathan Parsons) and then Luke Spencer (Anthony Geary) notices something in the photo that will set Luke, Laura Spencer (Genie Francis), Holly Sutton (Emma Sams), Lulu and Dillon off on a quest. Some “General Hospital” rumors are floating that Lucky and Ethan may have faked their kidnapping, but for what purpose? Could the boys want Luke to be with one of their mothers instead of Tracy? Hopefully this plot will get more interesting soon…

Don’t miss a minute of Wednesday’s action packed show them come back to CDL every day for more juicy “General Hospital” spoilers, gossip and rumors.