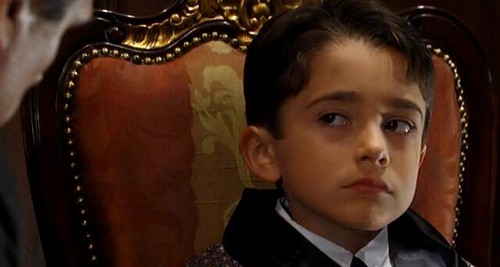 General Hospital spoilers are delighted to announce the great success of Nicolas Bechtel who plays Spencer Cassadine on GH and Rob Kardashian on a new hit TV series, ‘American Crime Story.’ General Hospital has a rising star on their hands but this is not news to anyone. 10 year old Nicolas Bechtel who portrays Spencer Cassadine has landed a dream role he will be playing a young Rob Kardashian of the Kardashian family. Rob Kardashian’s dad, Robert Kardashian Sr. was a lawyer and personal friend of the accused murderer OJ Simpson. In Fact Robert’s unfaithful wife, Kris Jenner, who he later divorced for cheating, was besties with OJ’s wife at the time, Nicole Brown Simpson. Robert was part of the “Dream Team” of defence lawyers who somehow managed to get their guilty client off with an acquittal.

The movie is by Ryan Murphy and is ‘An American Crime Story: The People vs O.J. Simpson’ – about the the infamous double murders in 1994 of Nicole Brown Simpson, O.J.’s ex wife and her pal Ronald Goldman. The two were slaughtered by OJ at his ex wife’s house in Brentwood Ca. and with OJ being the main suspect in this horrific crime. The circus of a trial started in Nov 1994 and the verdict came in on Oct 3, 1995 as not guilty! Such a miscarriage of justice didn’t help OJ Simpson for long as the convicted felon now sits in a Las Vegas prison doing hard time on other charges.

Nicolas Bechtel will be acting along side greats Cuba Gooding Jr [OJ Simpson], John Travolta [Robert Shapiro], David Schwimmer as young Rob’s dad Robert Kardashian Sr. – Nicholas is virtually everywhere in commercials and he has also played in the movie Rake starring Greg Kinnear and the Internet movie Underdog Kids. Congratulations Nicolas we wish you continued success!! Come back to CDL often for all your General Hospital spoilers and news!