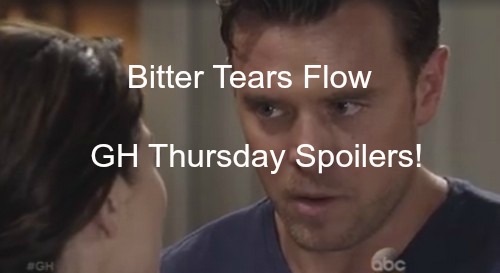 “General Hospital” (GH) spoilers indicate that it’s D-Day for Liz – Jason will rage at her today for her lies and it’s not pretty. Here’s a look at what to expect on the drama-filled Thursday, December 10 episode of GH. It’s all brawls, all day long!

Liz Webber (Rebecca Herbst) was glad to see Jason Morgan (Billy Miller) come home – until he confronts her about her dishonesty. Liz tries to defer and delay but Jason corners her and is prepared to get ugly if she doesn’t tell the truth.

Liz will admit it all – then the rationalizations start, followed by tears, pleading, then full-on histrionics. Too bad Jason is not the forgiving type. This knockdown drag-out fight will end up with Jason walking out after Liz can’t get him to see it her way.

Patrick Drake (Jason Thompson) calls out Sam Morgan (Kelly Monaco) on her apparent and ongoing obsession with Jason and calls off their engagement. Now it’s Sam’s turn to plead for her guy not to dump her. It won’t work.

Patrick has determined that Sam will always choose Jason over him and he won’t live like that. He breaks it off with her to protect his heart and then has break the bad news to Emma Drake (Brooklyn Rae Silzer) who will be crushed.

Patrick and Emma will dial up Robin Scorpio (Kimberly McCullough) soon and they start to realize that Robin is not just away from them for work but may be in real danger. Sounds like they need to pack for a rescue mission.

“General Hospital” spoilers hint that Robin’s captor may be none other than that handsome devil Jerry Jacks (Sebastian Roche). If so, Robin really is in danger. Jerry has shot and kidnapped Robin in the past, so there’s no telling what he might do now.

Another major conflagration that goes down on this episode is between Dante Falconeri (Domini Zamprogna) and his mom Olivia Falconeri (Lisa LoCicero). Dante stepped out to get some meds for a feverish Rocco.

Valerie Spencer (Brytni Sarpi) stays behind to babysit. Too bad Olivia stopped back by and catches Val in Dante’s apartment holding Rocco. Olivia will realize Valerie was there the whole time when Olivia was badmouthing her before.

Olivia will take this chance to call names right in Val’s face and says she’s a homewrecker who needs to get the hell out of her son’s life so he can get back with Lulu Spencer (Emme Rylan) – the woman he’s meant to be with.

Dante will walk in on his mom being vicious to Valerie and will try and shut it down. Nothing brings out the macho in a guy like attacking his girl – even if it’s his mom that’s the perpetrator. Dante will tell her to stop but Olivia is undeterred.

And really, does Olivia have any room to talk? She’s guilting Dante about Rocco growing up in a two-parent home when she raised Dante alone, lied about his dad for decades and the truth didn’t come out until after Sonny Corinthos (Maurice Benard) shot his son Dante.

Will Olivia run over to The Haunted Star to try and tell Lulu to fight or her marriage? If so, she could see Johnny Zacchara (Brandon Barash). They sure had some good chemistry in the past and Olivia is single, so… that would be super-hot!

Meanwhile, Lulu is trying to get Dillon Quartermaine (Robert Palmer Watkins) to not report the fugitive holed up on her boat. Will Dillon keep it zipped? No doubt he’ll do exactly what Lulu asks but isn’t he wondering what’s between Johnny and Lulu?

Also, when will see more Crimson with Nina Clay (Michelle Stafford) and Maxie Jones (Kirsten Storms)? GH spoilers indicate that Nina and Maxie have made big plans and Dillon is part of it – we’ll see more on this in coming episodes.