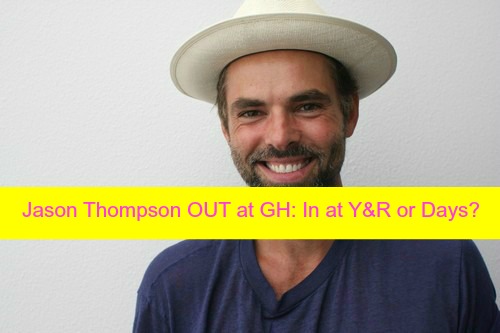 “General Hospital” (GH) spoilers include news that Jason Thompson is vacating the role of Dr. Patrick Drake. The actor said good-bye to fans, cast members and ABC executives via Instagram on Friday, October 30. There is no confirmation at this time when Jason’s last airdate will be as Dr. Drake.

Rumors about Jason Thompson leaving “GH” have been circulating for several days. There is much speculation about whether or not Jason will be cast as Billy Abbot on “The Young and the Restless” or possibly make the move to NBC’s “Days of Our Lives” to take on the role of back-from-the-dead EJ DiMera. Since it has been confirmed that Burgess Jenkins as Billy Abbott on “Y&R” the big buzz is that Jason is moving to the soap opera that has dominated the No. 1 position for nearly three decades.

Jason’s farewell to “General Hospital” viewers touched many fans deeply and they expressed their sadness about his departure. Thompson portrayed Dr. Patrick Drake for over a decade and it is with a heavy heart that he made the difficult decision to exit the soap opera.

Viewers are wondering what will happen now to Dr. Drake? Kimberly McCullough is headed back to Port Charles to resume her role as Dr. Robin Scorpio-Drake. That announcement caused much speculation regarding the length of Robin’s stay – and whether or not Patrick’s ex-wife will be the reason Sam Morgan’s (Kelly Monaco) leaves town.