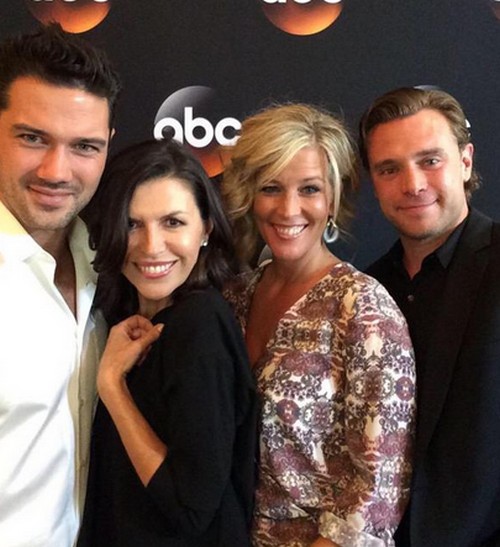 “General Hospital” spoilers reveal four couples that are headed for disaster in coming weeks. Port Charles will turn from a city of romance to a hotbed of misbehavior, jealousy and feuds in a very short time. Couples to be affected include: Lulu and Dante, Valerie and Dillon, Sam and Patrick plus Liz and Jake. Here’s a look at what’s coming for these four sexy young couples that spells disaster all around.

Lulu Spencer and Dante Falconeri vs Valerie Spencer and Dillon Quartermaine:
Lulu Spencer (Emme Rylan) and Dante Falconeri (Dominic Zamprogna) sure bounced back quick from Lulu’s suspected cheating with Dillon Quartermaine (Robert Palmer Watkins) and Dante’s actual cheating with Valerie Spencer (Brytni Sarpi) – in fact, looks like it was far too quick. Perhaps if Dante came clean they could have really worked through things, but those two are still skating on lies.

And now that Dillon asked out Valerie to try and do a solid for Lulu, things are going to go from bad to worse. Lulu is rumored to get warm fuzzies about Dillon when she reads the new draft of his screenplay that he wrote based on her notes. That has her wondering if she and Dillon may not have some chemistry brewing. And when she sees him in Valerie’s arms, it will bother her a lot.

Meanwhile Lulu’s hubby Dante didn’t look very happy when Val told him she and Dillon were going to date. The big question is, will Dillon fall for Valerie while Dante does the same. Or will Dillon become enchanted with Lulu once again and this turn into a whole couple swapping mess? And, there’s still the lingering issue of whether Val could turn up pregnant from her one night stand with Dante.

These two couples will be interesting to watch, and you can be Lulu won’t take it well if both her husband Dante and her ex Dillon decide Valerie is the one they both want and she’s left out in the cold. But it’s far more likely that these two will be cheating among themselves soon and that Dante and Lulu’s marriage will blow up along with Valerie and Dillon’s budding romance.

Sam Morgan and Patrick Drake vs Liz Webber and Jake Doe:
There’s no way that this foursome isn’t going to end up in a deep mess. Hayden Barnes (Rebecca Budig) is awake and this means the secret about Jake Doe’s (Billy Miller) identity will come out. But there’s a persistent rumor that Patrick Drake (Jason Thompson) will get the news from Hayden somehow and then rapidly propose to Sam Morgan (Kelly Monaco) to lock her down ASAP.

With a ring on her finger from Patrick, will this make Sam hesitate to pursue Jake once she knows he’s Jason? And will Jake stick with Liz Webber (Rebecca Herbst) once he knows that she was plotting with Nikolas Cassadine (Tyler Christopher) to keep his identity a secret? Jake seems a pretty forgiving guy and he has to know that Liz only kept the secret because she loved him. But still…

Sam will hate to break Jason’s heart but, karmically, he kind of has it coming since he dumped Sabrina Santiago (Teresa Castillo) when his wife came back from the dead. What’s interesting is to wonder if, after Patrick and Liz get dumped by Sam and Jake/Jason, whether they might end up in a romantic relationship. The two have good chemistry, they both have kids and it might be fun to watch.

However, there’s another persistent rumor that Rebecca Herbst has one foot out the door. She might leave Port Charles after she’s humiliated and leave little Jake Spencer (James Nigbor) with his dad and take off to be with Lucky Spencer (Jonathan Jackson) in Ireland. The rumor includes the reappearance (and recasting) of Liz’s sister Sarah Webber to fill the gap in Port Charles.

Time is running out for all these couples – who will implode first? Liz and Jake? Dante and Lulu? Share your thoughts in the comments below on which of the four couples will be the first to have an explosive break-up.

Be sure to come back to CDL often for more “General Hospital” spoilers, news and gossip.