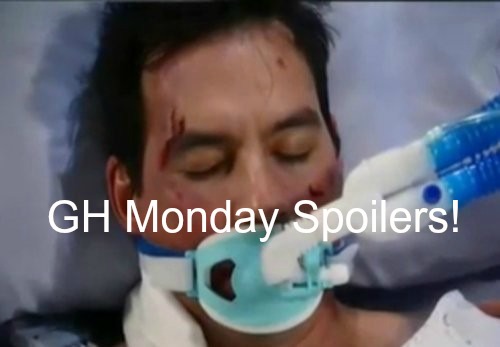 “General Hospital” (GH) spoilers indicate that the holidays will continue to be bumpy. Nikolas Cassadine (Tyler Christopher) wakes up and immediately goes on the warpath against Jason Morgan (Billy Miller). Check out these spoilers for the Monday, December 28 episode to see what happens.

Nikolas plans to make the most of his circumstances. He’s not happy he was thrown off a balcony, but Nik sees right away how he can use this to his advantage. Hayden Barnes (Rebecca Budig) is at his side and they discuss how to best use Jason’s actions against him.

Later, Liz Webber (Rebecca Herbst) tries to talk Nikolas and Hayden down and convince them to not press charges against Jason and tell the cops it was an accident. Nikolas will insist it was not an accident and Hayden will back him up.

Of course, Liz has two reasons for trying to convince Nikolas to change his tune. Not only does she not want her baby daddy to spend the next decade in jail, but Liz wants to be the one to save him so Jason will have to be grateful. Too bad it doesn’t work out.

Paul Hornsby (Richard Burgi) also has to face the music. Paul assured Ava Jerome (Maura West) that he could talk Tracy Quartermaine (Jane Elliot) down so she wouldn’t spill their dirt but does he have as much influence with his ex as he imagined?

Tracy is livid and tells Paul to pack his spiffy suits and get the heck out of the Quartermaine estate. What’s more, Tracy tells him she’s going to tell everyone the tough-on-crime DA was spotted right on top of Port Charles’ most infamous woman.

Paul will make every effort to defuse Tracy’s temper, but it looks like he’ll still need to pack his bags and go. Will Paul go update Ava on how it went with Tracy? Ava has a special Christmas planned with Kiki Jerome (Hayley Erin) and baby Avery.

But first Avery enjoys face time with her daddy Sonny Corinthos (Maurice Benard) who will be eternally grateful to Kiki for all she’s doing for the Corinthos clan. Not only has she been a good friend to Morgan Corinthos (Bryan Craig) but now she delivered his baby on Christmas.

Morgan will need all the support he can get soon since he’s headed for major trouble! Another Corinthos kid dealing with drama is Michael Quartermaine (Chad Duell). Sabrina Santiago (Teresa Castillo) wants to know if he’s going to dump her.

Michael will break some bad news to someone on Monday. Will he tell Sabrina they’re done? Or does Michael come clean to his parents about Sabrina’s baby daddy being Carlos Rivera (Jeffrey Vincent Parise) – the man who they all think shot Sonny Corinthos (Maurice Benard)?

Over at the park, Jason encounters Damien Spinelli (Bradford Anderson) who gets to hear about the Nikolas incident but then lands firmly on the side of his BFF. The Jackal is certain Jason wouldn’t have thrown Nikolas over the balcony.

The two former pals chat and start to find their way to deeper friendship. It’s all good until Damien hits a sore spot when he asks about Sam Morgan (Kelly Monaco). Jason just recovered a memory about the necklace Sam was wearing and it sparked some feelings in him.

Could this lead to a breakthrough with Sam? After a run in with Jason, Sam heads to Patrick Drake’s (Jason Thompson) house and comes in brazenly, interrupting a sweet moment between Patrick and Robin Scorpio (Kimberly McCullough).

Robin will let them talk and Patrick will make it clear that he’s back with Robin. Will Sam’s head spin at how fast Patrick went from loving her to getting back with Robin? Kind of serves Sam right for stringing Paddy along and kissing Jason behind his back.

All of this and so much more on the Monday, December 28 episode. Don’t miss a moment then come back to CDL for more juicy “General Hospital” spoilers and news.