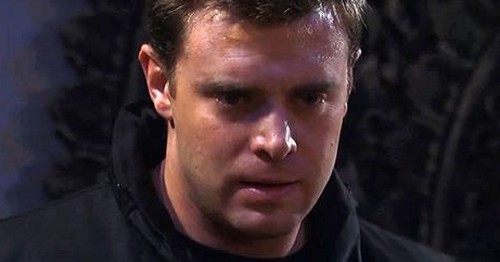 “General Hospital” spoilers tease that the episode of the ABC soap airing on Thursday, January 22 will be full of crazy drama. GH rumors have been floating around for quite a while that Fluke (Anthony Geary) is really Luke Spencer’s doppelganger cousin Bill Eckert, and according to “General Hospital” spoilers for Thursday’s episode of the ABC soap – Sonny’s theory about Bill Eckert has really got Fluke riled up, and he is determined to take out Sonny’s son Michael (Chad Duell) to keep him quiet. In the “General Hospital” sneak peek video for January 22 Sonny warns Fluke over the telephone to “stay away from Michael.”

“General Hospital” spoilers reveal that Michael Corinthos/Quartermaine is making it very difficult for Sonny to protect him from Fluke. Shawn and Duke (Ian Buchanan) meet on January 22 to discuss the restraining order that Michael hit him with, and Duke realizes that Michael is in serious danger. Meanwhile, in the “General Hospital” spoiler video for Thursday’s episode of the ABC soap, Michael informs Lucas that he “doesn’t want Sonny’s (Maurice Benard) protection.”

In other “General Hospital” news, the spoiler video for January 22 reveals that GH fans can expect to see an awkward conversation between Maxie and Nathan regarding Johnny Zacchara (Brandon Barash). A puzzled Nathan (Ryan Paevey) reveals to Maxie that Johnny told him he “has a history with her.” Meanwhile, across town, Sam Morgan sits down with her mother, Alexis (Nancy Grahn), to dish on her hot and steamy hook-up with Dr. Patrick Drake. And at the hospital, a panicked Carly demands to know why Jake (Billy Miller) has a gun in his bag – and Patrick reveals that there is a chance Sam was right about Jake and he did take her hostage and help free Cesar Faison.

So GH fans, do you think that Fluke will make good on his threats and have someone take out Michael? Is Michael making a big mistake by not letting Sonny protect him? Will Johnny Zacchara come between Maxie and Nathan? Do you think Sonny is right and Fluke is Bill Eckert? Let us know what you think in the comments below and don’t forget to check CDL tomorrow for more “General Hospital” spoilers and news.