General Hospital (GH) Spoilers: Robin Back in Port Charles to Wreck Another Wedding or Save a Life? 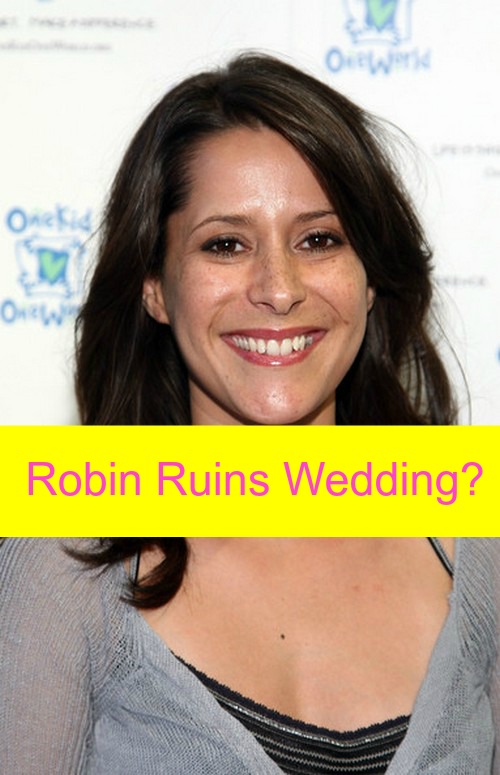 Recent “General Hospital” (GH) spoilers reveal that Robin Scorpio (Kimberly McCullough) is back for November sweeps to wrap up her storyline and do what she does best – make people uncomfortable with her unflinching honesty.

Robin will be back for Jake Doe (Billy Miller) and Liz Webber’s (Rebecca Herbst) wedding and McCullough says, “I’m back to kick some butt and tells some truth!” The truth she will tell seems obvious – she may be back to expose Liz’s whopper of a lie.

The biggest secret that needs some light on it right now is the “mystery” of Jake’s identity. Robin knows for sure that Jake is Jason and it looks like she may show up in time to shut down Liz’s lies and keep Jake from wedding Liz when he’s already married to Sam Morgan (Kelly Monaco).

We know that one thing Robin doesn’t shy away from is telling truths at the worst possible moment. After all, she wrecked Patrick Drake’s (Jason Thompson) wedding to Sabrina Santiago (Teresa Castillo).

Robin seems to have wedding-ruining momentum going, so why not foul up Jake and Liz’s as well? But it’s not just about the wedding – there’s more in store for Robin. Show runner Frank Valentini says, “There is some really cool stuff planned for Robin. It’s a race against time and a trio is formed in a desperate attempt to help save a life that hangs in the balance.” That spoiler tidbit definitely does NOT sound wedding-related.

With Tristan Rogers also back for a short-term stint as Robert Scorpio, dare we hope that the trio formed could be Robin, Robert and Anna Devane (Finola Hughes)? Could we see the Scorpios back fighting a foe together? Or perhaps Robin and Robert have to work with someone else to help save Anna from the evil plans of Paul Hornsby (Richard Burgi)? It’s not clear how long Robin is staying, though, and Robert Scorpio is not due back in town until December.

There’s a heart-breaking chance that Robin and her dad may not overlap. When Robin does leave, there’s a question of whether Patrick will go with her since Jason Thompson is officially and formerly out at GH. In the coming weeks, Patrick and Sam will split, even though he and Sam may have eloped prior to the Liz and Jake wedding.

With Patrick and Sam done, will Patrick leave town with Robin? And will Emma Drake (Brooklyn Rae Silzer) stay behind with Anna or go with her parents?

The one thing we know about Robin’s appearances in Port Charles is that they are never without drama. Wouldn’t it be horribly ironic if Robin wrecked Sabrina’s life again by telling Michael Quartermaine (Chad Duell) he’s not the father of her baby?

Robin loves to reveal paternity truths – she hates those types of secrets. And finally, is Robin coming back to give permanent closure such that her role is closed out for good? Or is this just one more in a string of what will be ongoing, occasional reprisals of the part?

Robin is handy to bring in now and then for life-saving science and medical procedures and to wreck lives, but she’s no longer a part of the real fabric of Port Charles. She’s more of a distant cousin we don’t see often anymore.

Will Robin and Patrick reunite as a couple to explain his departure? We know Jason Thompson is already mulling a lead role over at The Young and the Restless, so it looks like the actor is done with GH, even if the part is not.

“General Hospital” is casting for a leading male of the approximate age of Patrick so they may be recasting Patrick rather than writing him out of the show. GH certainly needs more doctors but Patrick hasn’t had a compelling plot line in a while – he’s been more of a male sidekick to storylines related to the females in his life. So what’s in store for Robin besides an appearance to save Jake from marrying Liz? We can’t wait to find out!

More on Kimberly McCullough’s return as news breaks and other “General Hospital” spoilers every day here at CDL. Stay tuned!