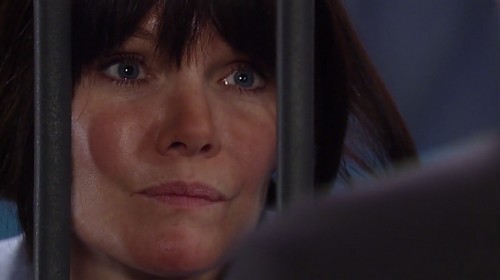 Here’s some “General Hospital” spoilers to get you ready for the Thursday, September 17 episode. Thursday’s show is focused on the Corinthos clan and Corinthos-adjacent characters. Morgan Corinthos (Bryan Craig) hasn’t calmed down even though dad Sonny Corinthos (Maurice Benard) survived the surgery. And Morgan is further off the rails now that Valerie Spencer (Brytni Sarpi) delivered the news that Julian Jerome (William deVry) walked out of the PCPD lock up because there’s no physical evidence to tie him to the shooting.

Morgan goes off on his brothers and then on TJ Ashford (Tequan Richmond). Morgan demands that TJ give up evidence against Julian tying him to Sonny’s shooting. The problem is that TJ doesn’t have anything that will link the former mobster to the crime. Morgan rants that TJ owes them because it’s his fault that Sonny was lured to the shooting.

Seems like Morgan wants TJ to make up evidence to implicate Julian even if there is none, but TJ already gave his formal statement to the cops – plus his mom Jordan Ashford (Vinessa Antoine) is the police commissioner and TJ is not comfortable manipulating the truth. Dante Falconeri (Dominic Zamprogna) and Michael Quartermaine (Chad Duell) try to calm Morgan.

Sonny wakes up and tells Carly Corinthos (Laura Wright) that the only reason he’s made it through this far is because of her and the kids. But Sonny’s ordeal is just starting. Patrick Drake (Jason Thompson) already mentioned swelling around his spinal cord. Wait for the news of paralysis that may or may not be permanent. Sonny will speak to his kids today.

Another of Sonny’s kids is back in town – Kristina Corinthos-Davis (Lexi Ainsworth). Alexis Davis (Nancy Lee Grahn) brought Kristina back to town with her and Kristina is upset to hear that her father was shot and could be on his deathbed. Alexis is also stunned to hear the news. Later, Alexis has a talk with Julian – he has something important to ask her.

Julian wants Alexis to leave town with him – at least for a while. Even though Julian isn’t responsible for Sonny’s shooting, he knows Morgan and Sonny’s crew will come gunning for him and he doesn’t want to be in harm’s way. Will Alexis leave town? Alexis and Julian could head out of Port Charles until it’s time for Julian’s trial.

Julian gets a call from Ava Jerome (Maura West) who tells him she’s going to get her baby back thanks to her lawyer Scotty Baldwin (Kin Shriner) who has the evidence against her and is willing to get her off on the murder charges – for a cost. Ava’s trial starts and she’s unhappy to get some news – is it that Sonny pulled through or is it related to Carly and baby Avery?

Rat fink Ric Lansing (Rick Hearst) is the DA prosecuting Ava’s case and he asks the judge for a continuance. Could Ric need extra time because he can’t find critical evidence in the case? Scotty knows why and fights tooth and nail for the case to start – they were ready to prosecute before so he thinks the show should go on. The judge will likely agree and Ric’s left scrambling.

Dante continues to sweat in guilt over cheating with Valerie and seeks out Nathan West (Ryan Paevey) for advice. Nathan tells Dante that he told Valerie to stay away from him and encourages Dante to avoid Val and not confess to Lulu Spencer (Emme Rylan) for the sake of his marriage. Meanwhile, Valerie questions her feelings for Dante in light of a critical development.

Don’t miss a moment of GH and be sure to check back often with CDL for daily “General Hospital” spoilers, gossip and more.