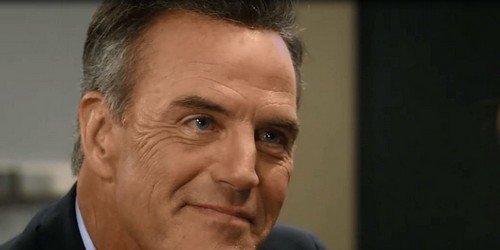 This “General Hospital” spoilers looks at what will happen now that Sonny Corinthos (Maurice Benard) is near death thanks to Paul Hornsby’s (Richard Burgi) attempt on his life. Is the Teflon Don finally done for, will Sonny die? When Michael Quartermaine (Chad Duell) stepped up to take over the Corinthos syndicate, no doubt he thought it was going to be a short-term stint. But with his dad at death’s door, it looks like this may be a permanent gig. Will Michael stick with the mob or let the Corinthos syndicate wither and die?

Michael represented himself well as a true Corinthos and the head of the syndicate at the five families meeting and took on Ava Jerome (Maura West) firmly and without hesitation. But Michael has no idea what he’s really up against. He thinks it’s just Ava he’s dealing with – and perhaps her brother Julian Jerome (William deVry). But Ava has City Hall behind her and Michael is clueless about how deep are the power resources that Ava can tap to go toe to toe with the Corinthos syndicate.

Paul just killed off Kyle Sloane (Robb Derringer) to keep secret the fact that Carlos Rivera (Jeffrey Vincent Parise) is dead so they could keep using him as the straw man they can blame for Sonny’s shooting. Paul will also effectively threaten Anna Devane (Finola Hughes) to ensure her silence. This will leave the Corinthos boys – Michael, Morgan Corinthos (Bryan Craig) and Dante Falconeri (Dominic Zamprogna) chasing shadows and never looking at where the real danger lies.

Sabrina Santiago (Teresa Castillo) will not be happy that she’s seeing a side of Michael she never knew existed – but that Maxie Jones (Kirsten Storms) and Lulu Spencer (Emme Rylan) warned her about. Sabrina may think when she announces her pregnancy to Michael, he’ll walk away from the mob, but he won’t. Michael will patiently explain that abandoning the syndicate puts the whole family in danger and he can’t do that to his mom, brothers, baby sister and his dad who is in a weakened condition. Teresa is pregnant and she’s showing so there is only so long TPTB can delay Sabrina’s pregnancy announcement!

It’s like the epic quote from The Godfather III “Just when I thought I was out… they pull me back in.” Mob life is like quicksand – you can’t walk away. What’s really scary is that Michael is taking over the organization at a time when being the young Don of the Corinthos clan will be the most dangerous job in Port Charles. Paul will be looking to target Sonny’s syndicate using the resources of the PCPD and DA’s office – all with Mayor Lomax’s (Saidah Ekulona) support since we now know she’s working with Paul.

Could Michael end up in Pentonville on racketeering charges for stepping up to protect his family? Remember all the terrible things that happened to Mikey last time he was in jail… In coming weeks, look for the entire family to coalesce around Michael as the presumptive heir to Sonny’s throne. Morgan will even support Michael once he allows Morgan some involvement in the organization. This week, Carly Corinthos (Laura Wright) will see her kids getting in too deep and beg them to back off.

Neither will walk away from their dad’s syndicate and both Michael and Morgan will be at risk… Check back with CDL for more “General Hospital” spoilers on the mob action in Port Charles and the catastrophic consequences to come as events unfold.