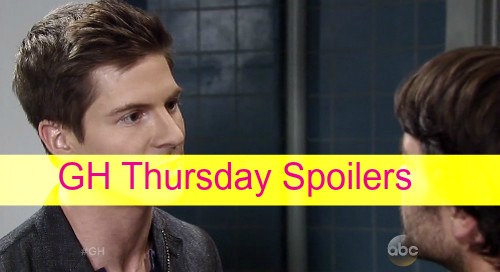 These “General Hospital” spoilers will get you pumped up for the Thursday, October 15 show. Tomorrow’s GH digs into major plots and sees several threats issued. Now that Carlos Rivera (Jeffrey Vincent Parise) has floated to the surface of the harbor and terrified Maxie Jones (Kirsten Storms), Paul Hornsby (Richard Burgi) has to put a plan into action.

He was relying on Carlos as the straw man for the Sonny Corinthos (Maurice Benard) shooting that he himself committed. But now with Carlos back as fish food, Paul has to scramble. He calls Anna Devane (Finola Hughes) to the docks to get things started.

Although Anna was the one who shot Carlos and Paul knows that thanks to Kyle Sloane (Robb Derringer), Paul likely doesn’t want to use her as a scapegoat for Carlos’s murder. Instead, he wants Anna to go down for killing Kyle which will leave him in the clear for that crime.

Paul already started laying the groundwork for blaming the killing of Carlos on Sonny. If Paul can pin one murder on Anna and one on Sonny, Paul gets rid of two potential complications to his master plan.

Paul also has to keep Sonny from killing Ava Jerome (Maura West) now that Carlos cannot possibly be the Sonny shooter and Paul just agreed to buy her time to sort her custody issue when Ava tugged at his heartstrings.

Ava calls to warn Paul about Anna but he is already on top of it. Will Paul trick Anna into agreeing that Sonny could have killed Carlos because she doesn’t want to go down for the crime? If so, that will dig her deeper into Paul’s evil plans for her.

Sonny and Carly Corinthos (Laura Wright) also wonder if Morgan Corinthos (Bryan Craig) might have been the shooter that killed Carlos. Of course, he wasn’t, but look for Morgan to head back for a showdown with Ava about Carlos not being the man who shot Sonny since he was bobbing like a buoy in the harbor and can’t have pulled the trigger. And what will this mean for Julian Jerome (William deVry) since it could put Sonny’s sights back on him? This is getting good…

There’s also drama back at the PCPD – Maxie Jones (Kirsten Storms) is finishing her statement about finding the body when Nathan West (Ryan Paevey) comes to comfort her. They get into a discussion about the Falconeris and Dillon Quartermaine (Robert Palmer Watkins). Maxie comments that she found out that Valerie Spencer (Brytni Sarpi) isn’t sleeping with Dillon – will they both admit to making a false pregnancy test assumption about Val?

Then Maxie lets slip that Dillon does fancy someone and Nathan wants to know who has caught her director’s eye. Will Maxie reveal that Dillon digs Lulu Spencer (Emme Rylan)? When will Nathan and Maxie finally lay clean all that they know about the Falconeri marriage?

Right now, Nathan is protecting Dante Falconeri (Dominic Zamprogna) at all costs and Maxie is trying to do the same for Lulu but is also covering for Dillon while Valerie is left hanging out there on her own.

Also at the PCPD, Dante lays into Dillon for kissing his wife and tells him to stay clear of Lulu. Dillon may have taken the rejection from Lulu in stride, but he’s not going to let Dante push him around when he knows Dante has been faithless to Lulu.

Dillon will flat out call Dante a cheater and tell him he doesn’t deserve Lulu. This could send Dante into a tailspin. He knows Dillon wants Lulu and – with the information about Valerie – he could break up their marriage. What will Dante do?

Lulu, meanwhile, gets a positive checkup from her lady doctor and finds out she can definitely carry their embryo. She shares this good news with Dante who can’t exactly act enthusiastic when he knows there’s a countdown on when Lulu will find out about his one-nighter with Valerie.

Will Dante finally come clean before someone else tells Lulu? Also at GH, Hayden Barnes (Rebecca Budig) is getting a checkup from Patrick Drake (Jason Thompson) about her amnesia.

Patrick isn’t sure why her memory is not returning and Hayden asks what she can do. Then later, Liz Webber (Rebecca Herbst) tells Hayden she thinks she’s faking the amnesia – looks like Hayden is not – and tells her to spill what she knows about Jake Doe (Billy Miller).

Hayden does know something about Jake, but will she tell Liz? Nah. If Hayden is smart, she’ll continue to play the absent-minded innocent and tell Liz to leave her alone. Nikolas may have to rescue Hayden from Liz.

Lulu tells Nikolas Cassadine (Tyler Christopher) she thinks he wants Hayden to stay without her memory but isn’t sure why. But the Jake secret won’t stay secret for too much longer. Sam Morgan (Kelly Monaco) has brought in Damien Spinelli (Bradford Anderson) to consult on Jake’s identity investigation and The Jackal shows up on Thursday to meet Sam and Jake at Jake and Liz’s house. Liz will be stunned if she walks in on them – she knows how good Damien is and that he will figure out Nik’s secrets soon.

All this and more leading up to a whiz bang of a cliffhanger Friday – check back with CDL for detailed daily “General Hospital” spoilers, gossip and more.