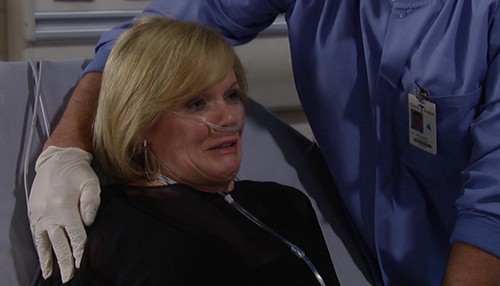 General Hospital spoilers tease that TPTB at the ABC soap will have to make some casting cuts in 2015 due to new regulations passed by the Television Actors Union. All four remaining daytime dramas on ABC, NBC, and CBS have to give their cast members a 7.2% wage increase. So some “General Hospital” characters will receive a hefty raise, and other GH characters will be cut loose so that ABC can afford to give the main characters a larger paycheck. Considering “General Hospital” has by far the largest cast of all of the soap operas – cast members are currently walking on eggshells and concerned they will be phased out.

We really don’t want to see any of our beloved Port Charles residents getting the axe – but it is pretty easy to determine which familiar faces we will be seeing less and less of as the cast and the ABC soap downsizes. Late in 2014, several characters were already bumped to recurring status, like John J. York’s character Mac and Lucas’s old flame Felix. If we had to predict what characters we could be seeing less of in 2015 based on rumors and lack of storylines, this actors could be getting the axe:

Felicia Scorpio-Jones – Kristina Wagner’s character Felicia Jones has been popping up a lot since Maxie Jones returned to Port Charles. However, now that the mayoral election is over and she didn’t win and the character isn’t involved in any other central storylines, we will probably be seeing less and less of her, especially since her hubby Mac has already been bumped down to recurring.

Olivia Falconeri – Aside from her hot and steamy hook-up with Julian Jerome on New Year’s Eve, Olivia Falconeri seems to have been put on the back burner over the course of the last few months. And, considering that fact that the character’s portrayer Lisa LoCicero revealed that she is pregnant in real life, GH fans can probably expect to see less and less of her as she gears up for maternity leave.

Sabrina Santiago – “General Hospital” rumors have been floating around for months that Patrick’s old flame Sabrina was exiting the ABC soap, and seeing as how we can barely remember that last time that we saw Teresa Castillo’s character, there is probably some truth to them. The same can easily be said for her old flame Carlos Rivera.

Johnny Zacchara – When “General Hospital” coming and going news confirmed that Brandon Barash was headed back to Port Charles as Johnny Zacchara, the actor clearly stated in more than one interview that he had not signed a contract and his visit was not permanent. Despite all of the drama that Johnny is stirring up right now, don’t expect him to stick around – his exit is imminent.

Ava Jerome – “General Hospital” rumors have been floating around the internet that Maura West has decided to leave the ABC soap and her character Ava Jerome will be killed off during February Sweeps. Honestly, we are really hoping that there is zero truth to this rumor, and we really can’t imagine “General Hospital” without the mobstress.

So GH fans, what characters do you think are on their way out at “General Hospital?” Do you think there will be a ton of cast cuts like fans are predicting? Can you imagine the ABC soap without Ava Jerome? How do you think TPTB will write out Johnny Zacchara’s exit? Let us know what you think in the comments below and don’t forget to check CDL tomorrow for more “General Hospital” spoilers and news.