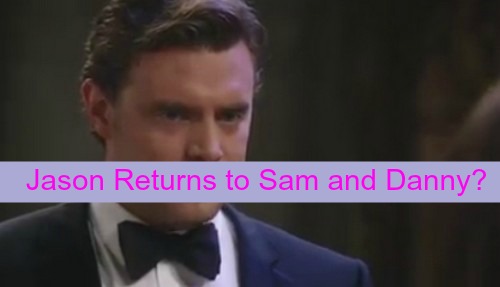 “General Hospital” (GH) spoilers indicate that it’s not a done deal that the now revealed Jason Morgan (Billy Miller) will walk off into the sunset with Sam Morgan (Kelly Monaco) anytime soon. The wedding drama is killing us with its slow unwind and it’s far from over. Now that all involved parties know that Jake is Jason, the serious stuff is really about to hit the fan.

Last we saw all four of our star-crossed lovers, Liz Webber (Rebecca Herbst) and Jake were at the bridge where they’ve shared tender moments and Patrick Drake (Jason Thompson) and Sam are at the chapel. Liz is terrified that Jason is about to dump her and the thing is, he really does not want to.

Jason loves Liz to pieces – which may change once he finds out about her lies. And Jason made it clear to Sam he doesn’t see her as more than his friend.

So what we will most likely see is Jason will make a declaration of love to Liz but with the caveat that this is a big mess that he has to sort through. Jason will feel like he’s wounded Liz even though he’s blaming Nikolas Cassadine (Tyler Christopher) as the master of this plot. Jason does not want to hurt Liz but he also can’t play house with her knowing he has a wife. However, walking away from Liz – even for now – means he’s walking away from the kids and that may be what he can’t do.

A big dynamic is how little Jake Spencer (James Nigbor) relates to Jason and how Jason relates to him once the kids hear the news. Jason will not want to make Liz’s kids feel like he’s choosing Danny Morgan over them so he may be tethered to Liz’s house – even if he doesn’t hop right back into her bed – for now.

While Jason and Liz will stay tight despite the reveal, Sam and Patrick are about to be shattered like fragile glass in an earthquake. Poor Patrick just stood there and watched Sam go gooey over Jason.

And then he asked if she decided instantly that she doesn’t love him anymore. Sam will cushion it nicely and tell him they had a good run and she cares about him, blah blah blah, but Patrick hit the nail on the head.

As soon as Sam became convinced it was Jason, Patrick may as well have been a stranger to her. Sam will feel bad about doing to Emma Drake (Brooklyn Rae Silzer) what she promised she wouldn’t do – leaving her like Sabrina Santiago (Teresa Castillo) had to do and like Robin Scorpio (Kelly McCullough) chose to do – but Sam will do it nonetheless.

It’s interesting that for both Sam and Jason that the children of their other lovers will be a major sticking point for both of them. Sam will pack up and likely head back to her penthouse she once shared with Jason and that mom Alexis Davis (Nancy Lee Grahn) has conveniently moved out of since she’s cohabbing with Julian Jerome (William deVry) now. But just because Sam and Danny are in the apartment, don’t look for Jason to pack up and leave Liz’s place and run to her.

The fact is, Jason is reeling right now and mostly what he seems to be feeling is anger. He’s been cheated out of years of his life and is frustrated that he has no memories and mad that he can’t just end the day married to Liz and at home with their little family.

A bomb just went off in his head and Jason doesn’t know where to turn or what to do. The “right” thing is to go to Sam and Danny, but his heart wants Liz and her boys. We all thought the reveal would be an ending… but this festival of pain is just beginning.