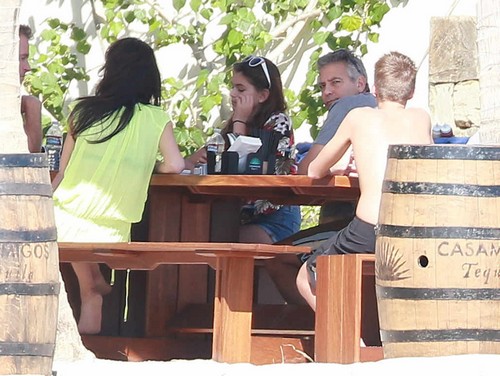 Will Amal Alamuddin and George Clooney stay married or divorce over George’s reputation with the ladies? George Clooney doesn’t exactly have a reputation for being faithful to his girlfriends/significant others, but he’s also never been married to a hotshot lawyer, a.k.a. Amal Alamuddin. Even though everyone predicted that George Clooney would never settle down, he proved everyone wrong and got engaged and married within a year – will he divorce again? Sure, the entire affair read like something out of the Great Gatsby, but still – George Clooney got married. To a woman. In real life. That’s a big deal, no?

Now, the question is whether he can stay faithful to said wife. Amal Alamuddin is a gorgeous, intelligent lawyer, whatever her other faults. But George Clooney was married once before, to Talia Balsam in 1989. However, sources say that their marriage ended on rumors of infidelity and cheating, and even if the rumors were inaccurate, they stuck. Of course, they weren’t helped by George’s revolving list of model girlfriends and his increasingly sordid reputation with the ladies.

At the end of the day, George claimed that he didn’t want to get married again, but he ended up getting married. Now, he’s claimed in the past that he doesn’t want children, but if Amal gets pregnant, what’s he going to do? Will he once again pull a switcheroo and claim that he’s ecstatic about having a child, or will he end up freaking out and cheating on Amal?

Men like George Clooney rarely ever change, and even though we don’t want to make presumptions about his ability to stay faithful to Amal Alamuddin, his history doesn’t exactly breed confidence in him staying with her. Maybe he’ll prove us wrong, but we have our pregnancy barometer to see if that’s the case.

What do you guys think? Whether Amal Alamuddin gets pregnant or not, will George Clooney end up cheating on her? Let us know your thoughts in the comments below.