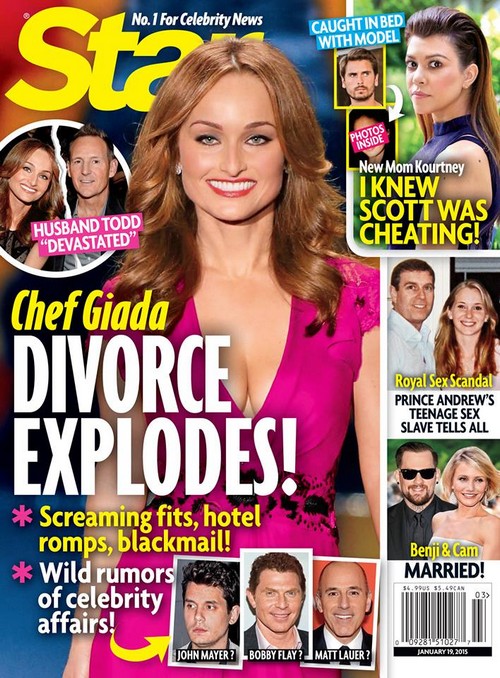 This week’s cover story of Star Magazine focuses on chef Giada De Laurentiis and her cheating scandal and divorce from Todd Thompson. Is their divorce going to get super ugly before it gets resolved? One has to wonder because it sounds like it has already gotten ugly and they have just filed the documents. Did John Mayer interfere with her marriage by cheating? It’s not the first time that he has douched up a relationship, so it wouldn’t shock us to learn that he was at the center of the good chef’s marriage problems. She probably thought she was upgrading before she realized how much of a douchebag John Mayer is.

Naturally, she probably had to move on with someone else because of John going back to Katy Perry at the beginning of the year. They were already spotted having dinner together and they were said to have hooked up again.

A source close to the situation told “Star” that Giada De Laurentiis wanted to wait to publish the news of her divorce filing, but her THREE guys threatened to take the news to the media. The spy said, “Giada wanted to announce the divorce after the holidays. But three different men – one from L.A. and one from Las Vegas – are looking for a payday or they’ll go public!”

Inside of the issue featuring chef Giada De Laurentiis, the reality TV couple of Kourtney Kardashian and Scott Disick are facing off over Lord Disick’s affair with a model. Is there proof? Of course! Kourtney Kardashian and Scott Disick’s cheating drama also unfolds on the latest cover of “Star” magazine. Inside of this issue, the magazine claims to have photos of the woman of who Disick has been skeeving around behind Kourtney’s back. It’s not the first time that the pair has had to deal with cheating rumors and you know what they say – where there’s smoke, there’s fire?

There has been a lot of rumors surrounding Disick’s cheating on Kardashian. Throughout her entire third pregnancy, rumors have exploded all over the media that he’s been busy banging other chicks. Does this really come as a shock to anyone at all? Seriously?