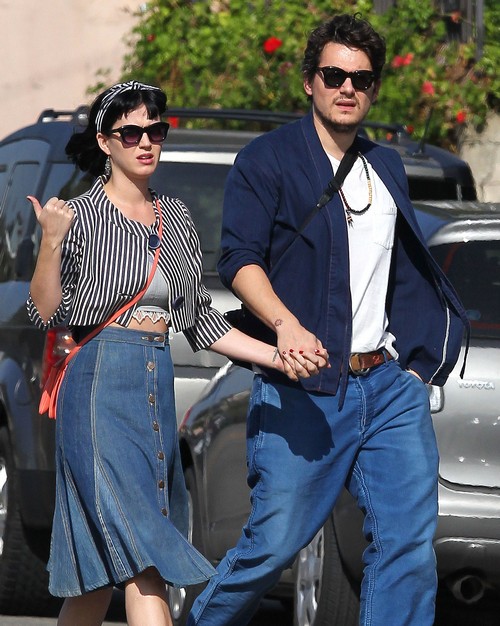 Katy Perry and John Mayer have had a years-long on-again/off-again relationship, and sources say that the tortured couple could AGAIN be back together and dating. Katy Perry and John Mayer broke up last February, and they were reportedly seen together in Beverly Hills last weekend, which makes this the first time that both of them have been spotted in public together since their breakup.

At the time, a source told People that they were both ‘strong-willed people’ and that they couldn’t make their relationship work despite a lot of effort, and thus, they ended up breaking up. However, these same sources add that Katy and John have ‘buried the hatchet’ and stayed friends since their breakup, and seeing each other in social situations doesn’t necessarily mean that they’re back together.

Then again, some select sources are claiming that John spent the night at Katy’s place, which is definitely more than a casual ‘social situation’. Spending the night – especially with exes who have an unresolved history – isn’t exactly going to end in Scrabble and Uno, if you know what I mean.

Plus, Katy and John have a history of dating, breaking up, dating, and breaking up again. This will mark the fourth time they are dating, if they are, indeed, dating again.

What do you guys think? Are Katy Perry and John Mayer dating for a fourth time, or are they just hooking up? Was this a one-time thing, or will this delve into a regular occurrence? Let us know your thoughts in the comments below.

What do you guys think? Are Katy Perry and John Mayer dating for the fourth time? Let us know your thoughts in the comments below.