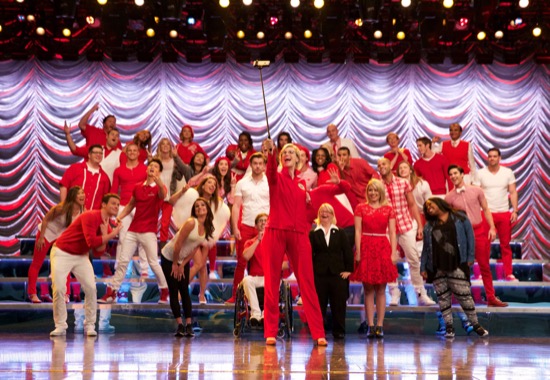 Glee returns to FOX tonight for an exciting all new Friday, March 20 season 6 and series finale called “2009; Dreams Come True,” and we have your weekly recap of the final episode below. On tonight’s two hour special, the curtain comes down as the series ends its six-season run with a look at how the original teen singers found their way to the glee club, and then flashes forward five years to see where life has taken them.

On the last episode, New Directions and the Warblers went head-to-head at sectionals. Meanwhile, Rachel had to choose between returning to NYADA and doing another Broadway show with her past love, Jesse St. James (guest star Groff). Did you watch last episode? If you missed it, we have a full and detailed recap right here for you.

On tonight’s episode as per say the FOX synopsis, “GLEE goes back in time to find out why the original members of New Directions initially signed up for glee club. Then, GLEE flashes forward to see how the character’s lives have progressed five years down the road.”

Tonight’s episode is sure to be a great one and you don’t want to miss it! Come back here tonight at 9 PM EST for our exciting live recap. In the meantime, hit up the comments section below to let us know how excited you are for the Glee season 6 series finale!

The original glee club members didn’t always have it so easy at McKinley. In fact they got to their positions now in life because they had to fight for it. Back then, their achievements weren’t simply given to them and that’s why on tonight’s two-parter series finale, we get to see what they were like before glee club seemingly rescued them.

And in Kurt’s case, his life was pretty bleak before he met either Will or Rachel. Apparently, freshmen year was the worst for him and there was even a moment when he contemplated suicide. However what he stopped him from going through with it was Ms. Pillsbury and his father both intervening.

Ms. Pillsbury became aware of Kurt’s situation when she caught him eyeing one of her suicide pros and Cons pamphlets and so she informed his father about it. And well Mr. Hummel told Kurt that maybe he should a club at school. He though if his got more involved at school and possibly made a couple while doing it then maybe high school wouldn’t be so horrible.

And as luck would have it, Kurt soon ran in Rachel on his quest to make friends. So she was the one that ended up telling him about the new glee club and although Rachel’s natural competiveness got in the way of them becoming friends then and there – she pointed Kurt towards one of things he was going to cherish the most in his life – his time with glee club.

That shared love of music is what also eventually led to Kurt befriending Mercedes. Hence news about the newly resurrected glee club spreaded kind of fast in those days.

Oddly enough, though, Mercedes joined the glee club after she felt like Rachel was pressuring her not to join. And then Tina and Artie joined the glee club after their punk rock friends dared them to. It seems these friends came up with the dare after they in turn were actually dared to dump their lunches on Rachel and Kurt. So the group of friends that would one day come to mean so much to each other didn’t even start out liking each other until glee club was formed.

But it should be noted that the first couple weeks of glee club was really tough. Especially, with the feud Mercedes and Rachel had going between them. Rachel, like usual, wanted to be the star from the very beginning and Mercedes was left feeling shafted when Rachel got the first lead. She felt like she was sidelined for a white girl when the truth is Will felt sorry for Rachel – more people at the school hated her than they did glee club itself.

And to be fair Will lost out on a lot too because of glee club. Before he started it, he was married to his high school sweetheart and he was upon a time Coach Sue’s best friend. Yet, in a blink of an eye, all of that changed due to jealousy.

Sue didn’t want there to be any other stars at the school besides her cheerleaders and Terri was worried about her husband gaining confidence – she knew that would one day it would lead to him realizing he deserved better.

Though, in the end, the bad came with the good. And no one at glee club regrets meeting Finn. Admittedly there was time when certain members thought Finn should be kicked out of the club, but after they started talking about him and more importantly reminiscing about the good things he did for all of them – they kept him on.

And even though no one would have suspected it back then, Finn went on to become the heart of their club. So that’s enough with looking backwards and in present time the glee club had one more competition to win – Nationals!

However here’s the thing about Nationals – it literally was over in a blink of an eye!

New Directions and their former Warblers friends won at Nationals yet at the time they had no idea what their winning would eventually mean for McKinley. Because after they won and Will had a track record of continuing to bring home championships – Superintendent Harris decided to stick his neck out for him. And so good old fashion McKinley was now going to be turned into the William McKinley School for the Performing Arts.

And Will was going to head the place as the new principle. It seems the overall district had been low in funding and test scores for quite some time. So they tried to cut all the arts programs in hope of focusing on other things like the core subjects. But what they found out is that some schools have actually gotten worse since the programs have been cut.

Thankfully, though, McKinley was never one of these schools. And that’s due in large part to Will. Will was the one that funded the first couple of years of glee club until they started winning and recently when all hopes was lost – Rachel, his protégé, began funding the glee club.

So of course Will was chosen to run the new school and he then handed over New Directions, just one of the many glee clubs at the school, to Sam. Sam was once an assistant coach but without a football team he ended up needing a new job. And, like always, Will helped.

Yet there’s no reason to be apprehensive about the future. Sam, for one, is going to make a great coach and Mercedes, before she left, reminded them all how great her time at McKinley was with. And in doing that she promised to never forget them. Apparently, she won’t get that much of a chance to see them later what with going on tour with Beyoncé but that doesn’t Mercedes is ever going to forget where she started.

And for that matter neither will Sue. Sue said goodbye to Will in the only way she can – through song. And prior to her leaving McKinley, she told Kurt how much she respected him. It seems that watching him go through the ups and downs of coming had inspired her.

So where was Sue five years into the future? She was running alongside the likes of Jeb Bush in the forthcoming presidential elections.

As for Rachel, she was always going to make it big in New York. But she ended up surprising herself. Five years after she led New Directions to their National win, she was married to Jessie and was acting as the surrogate for Kurt and Blaine’s baby. Kurt and Blaine had gotten married as soon as they returned to New York and it was revealed they were even playing a married couple on stage together in an adapted version of “Who’s Afraid of Virginia Wolfe?”.

And there weren’t the only couples to reunite. Tina and Arties got back together and though it isn’t official – Sam has been texted Mercedes a lot.

So, what do you know, life was pretty much great for everyone, but what counted as the cherry on top was when Rachel won her tony. It was something she always hoped for, but without Mr. Will Schuester then who knows where she’d be if she had been allowed to give up at any point along the way.

And in true glee fashion, they ended the show with a song.

Vice President Sue Sylvester introduced New Directions for the final time and everyone, from cast member we’ve haven’t seen since season three to the new guys this year, came out and sung One Republic’s “I Lived”.