Glenn is NOT Dead: Did Norman Reedus Spoil The Walking Dead Secret During Interview? 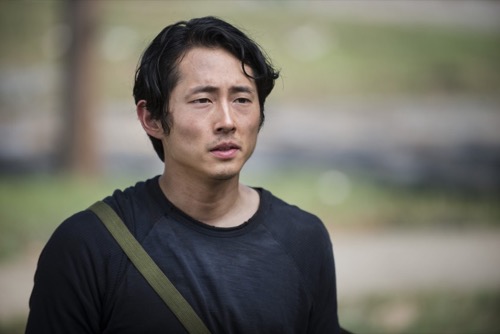 Norman Reedus just spoiled the biggest secret for fans of The Walking Dead season 6 when he spilled the beans about Glenn being dead. The AMC hit has been making viewers wait weeks for find out the fan favorite’s fate. Now it looks like all that long, drawn out suspense was a huge waste of time. Thanks a lot Norman!

The last time “TWD” viewers saw Glenn, he was buried under a horde of walkers everyone was left to wonder if Maggie’s man was a goner. It looked as if Nicholas’ breakdown and suicide was going to be the end of Glenn as well. Then viewers hypothesized that Glenn may be okay if Nicholas fell directly on their hero and if the blood and body parts belonged to Nicholas instead of Glenn.

Did Glenn escape by sliding under the dumpster or was he able to slip past the walkers by hiding his scent? Rick and his crew have escaped from some pretty impossible scenarios and it wouldn’t be too shocking if Glenn had also come up with a plan to escape the herd and get back home to his fiance safely.

It has been several weeks since Glenn either was eaten by walkers or escaped heroically and everyone has been waiting to see what happens and now we may not have to.

Well we know that Jon Snow didn’t die when everyone thought he was a goner. Apparently Glenn’s fate is not the same as Jon Snow and fans of “The Walking Dead” can comfortably believe that Glenn did not survive Nicholas’ untimely breakdown and suicide.

Glenn’s fate is expected to be revealed on season 6, episode 7 of “The Walking Dead” which is scheduled to air on Sunday, November 22. Now that we know Glenn is dead (thanks to Reedus) the most exciting part about the episode will be the possibility of seeing “Walker Glenn” and learning how he was found.

Update: Glenn is alive – check out our recap right here!