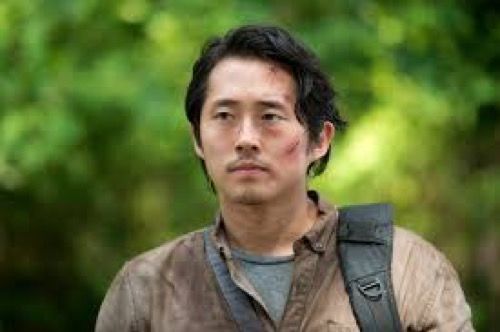 Glenn (Steven Yeun) has been a fan favorite character and one of the few remaining characters who has been around since season 1 of TWD. Andrew Lincoln, Chandler Riggs, and Steven Yeun (Rick and Carl respectively) have credit to 83 episodes, while Norman Reedus places second at 81 episodes.

The pizza delivery boy turned zombie-slaying badass has grown into a perfectly balanced character who, despite the insanity of the walker-infested world, remains humble, dependable, and honorable.

During last night’s episode of ‘The Walking Dead,’ Glenn and Nicholas were trapped by a herd of walkers. Seeking refuge on top of a dumpster, Nicholas put a bullet in his own head after looking at Glenn, slightly dazed, and said “Thank you.”

As Nicolas fell, his body took out Glenn who tumbled to the ground and appeared to be engulfed by a sea of hungry walkers. Very cropped shots of Glenn appearing to be eaten alive followed and fans clutched their pearls and gasped, “WAIT – Did Glenn just die?”

That is a very good question, and may have an anger-relieving answer. There are several points and possibilities that suggest ‘The Walking Dead’ faked Glenn’s death, or at least alluded to it.

We see Glenn’s anguished face screaming as his intestines are ripped from his appears to be his chest. That moment could be an indicator that Nicholas’ body fell on top of Glenn, and what you are seeing is Nicholas’ guts being feasted upon.

If you look at the way Nicholas’ body knocked Glenn off the dumpster – it would support the theory. Perhaps it’s a camera angle, but last I checked – intestines were not located in the chest cavity.

Yvette Nicole Brown appeared on the post-show discussion and made a great point that if Nicholas’ body was what we saw being feasted upon, it would give Glenn the opportunity to slide under the dumpster. Also, Nicholas’ flesh might mask the scent of Glenn’s living body. In the final shots of the scene walkers fill in the space, covering Glenn’s face as the camera zooms out. Is this cover for his escape?

While hardly a huge sign, but something to think about – The Talking Dead never directly said – “Glenn is dead.” The show also did not include Glenn in the weekly “In Memoriam” segment and Chris Hardwick asked fans not to read too much into the absence of one the most beloved and longest running characters being left out of Talking Dead’s feature.

Usually, after the death of a major character on TWD, the actor then shows up on the amazing follow up series – ‘The Talking Dead’ with Chris Hardwick. Steven Yeun, who plays Glenn, was not on the show following his character’s apparent death.

Instead, a prepared statement from show runner Scott Gimple addressed the death, which is odd in itself, but read “In some way we will see Glenn, some version of Glenn, or parts of Glenn again, either in flashback or in the current story, to help complete the story.”

This might be a way to explain the fact that Steven (who plays Glenn) has been on set daily. Yeun has also been photographed with Tom Payne, who plays Paul a.k.a. Jesus who has yet to appear on the show.

Let’s not overlook the fact that IMDB has Steven billed through the entirety of season 6. But what is worrisome is the possibility the rest of the season will be told largely through flashbacks. I cringe at the thought. TWD viewers will also get a 90 minute show next week solely focused on Morgan and his backstory told through recollections. Are TWD fans being set up for a constant rigor of flashbacks?

Finally, after all the teasing ‘The Walking Dead’ has done, gearing up to bring the ultimate TWD villain, Negan, to the show – to kill Glenn off in such an unceremonious way would be a huge letdown. Glenn’s death in the graphic novels is nothing short of jaw dropping, as it involves a baseball bat wrapped in barbwire Negan has lovingly named Lucile.

The death of Glenn is upheld as one of the biggest moment in the comic series, perhaps that is why getting knocked off a dumpster is so hard to believe.

Also note, viewers won’t find out the answer – at the earliest – for 2 weeks. Next week episode, season 6, episode 4 entitled ‘Here’s Not Here’ will focus on Morgan. Did ‘The Walking Dead’ kill of one of the major characters? Is Glenn really dead? Let us know your thoughts in the comment section below.