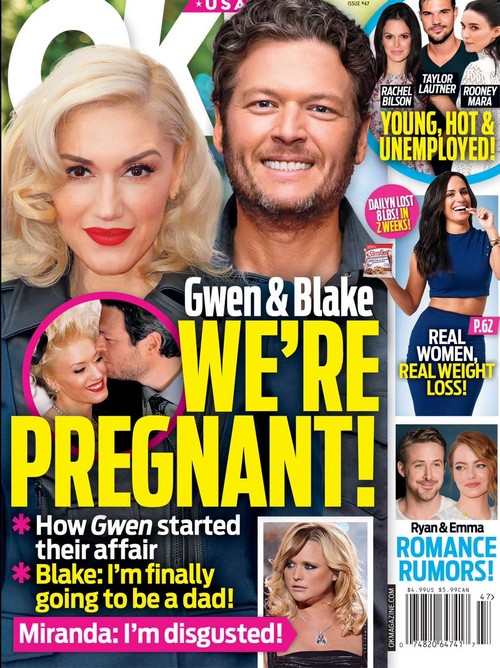 Gwen Stefani is pregnant with Blake Shelton’s baby, according to brand new report. Miranda Lambert is undoubtedly disgusted by the news ‘The Voice’ couple is starting a family so soon. Gwen and Blake’s baby news follows confirmation of their dating status and respective divorces.

Blake and Miranda announced their divorce on July 20, and Gwen and Gavin Rossdale confirmed their split just two weeks later. Coincidence? Maybe, but the insiders reporting to OK! claim the rocker and country king are already extremely close. According the sources, Gwen made a move on Blake! Shelton became so “smitten” with Stefani, he has a picture of her on his phone’s screen saver.

After photos of Blake and Gwen embracing each other and cuddling during Adam Levine’s Halloween party hit, ‘The Voice’ judges came clean with an announcement they were dating. However, it’s so much more than just dating.

After their marriages ended, Shelton and Stefani went on a “healing retreat” together the report states. There, they built a bond and the chemistry was so “undeniable” that Gwen Stefani and Blake Shelton want to be a family. WHEW!

Beyond the report Gwen Stefani is pregnant with Blake Shelton’s baby just 3 months after divorcing Gavin Rossdale, the allegedly expecting stars are looking into moving in together! Gwen’s former family home is for sale, and Blake has been staying at a place nearby. They want a place of their own to start a life together.

As for Miranda Lambert, she is likely disgusted by the news. Gwen and Blake managed to outshine her by confirming their relationship just hours before the CMAs on November 4. Miranda won an award for Female Vocalist of the Year, but all anyone could talk about was Shelton’s new relationship with Stefani.

Now that Gwen is possibly having Blake’s baby, it’s a huge slap in the face. Miranda didn’t want to have kids any time soon as she cemented her country music career. Essentially, Gwen Stefani is giving Blake Shelton the kids he always wanted!

Gwen is also slowly integrating Blake into her current family life. Her 3 sons with Gavin Rossdale know about the divorce, and it is hard on them. So, Stefani has introduced Blake into their lives as a friend. After Kingston, Zuma, and Apollo get to know and accept Shelton, Gwen wants to create a family life together.

What do you think about the report Gwen Stefani is pregnant with Blake Shelton’s baby? Is Miranda Lambert disgusted, or do you think she will let it roll off her back? Keeping check back to see more updates on ‘The Voice’ coaches romance on CDL.