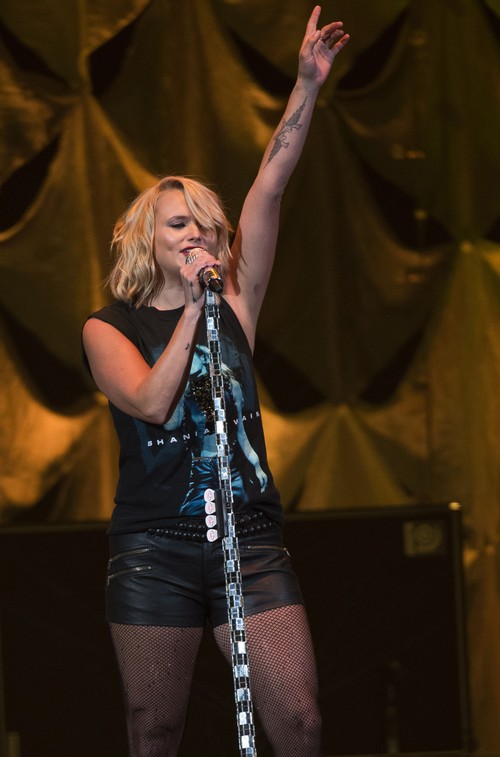 Of course Blake had to draw attention away from Miranda’s big night at the Country Music Association awards. Shelton can never get enough attention or publicity! The mega star’s representatives confirmed the Shelton-Stefani relationship with People just hours before the awards ceremony was scheduled to begin.

And why does Luke think this is all a publicity stunt? “Blake could never score a girl like that. It’s not true. I mean, come on people,” the CMA Entertainer of the Year winner replied when asked about the announcement while walking the red carpet November 4.

The comment from Luke Bryan, which may have been a joke, has Miranda seeing red. Lambert believes she is the hottest woman to come into Blake’s life! For Luke to imply otherwise was just another attempt to win fans over to Team Blake.

Miranda’s management team has been working overtime to clean up the bad girl of country music’s image – even pairing Lambert with Taylor Swift for a duet during T-Swift’s “1989” tour stop in Greensboro, North Carolina. Swift can’t stand Miranda and the feeling is mutual.

It’s been a rough year for Miranda, and even though Lambert took home her sixth consecutive CMA Female Vocalist of the Year statuette, the evening was nearly ruined. In her acceptance speech Miranda thanked everyone, saying, “Man, I appreciate it. I needed a bright spot this year, so thank you.”

But Miranda Lambert should take comfort in the fact that Blake Shelton didn’t win any CMA awards this year. Miranda took home one CMA, and was nominated for four. The other three include Entertainer of the Year, Music Video of the Year for “Little Red Wagon,” and Musical Event of the Year featuring Little Big Town for “Smokin’ and Drinkin’.”

But Miranda Lambert may still get the last laugh on Blake Shelton and Gwen Stefani. A romance is reportedly heating up with Kenny Chesney as they prepare for the “Spread the Love” tour in 2016.

By the time Miranda and Kenny hit the road Shelton and Stefani’s romance may have fizzled out – and Blake may be the one who is livid about Miranda’s hook-up – Kenny Chesney is one of Blake’s best buddies. That could prove awkward at next year’s Country Music Association awards.