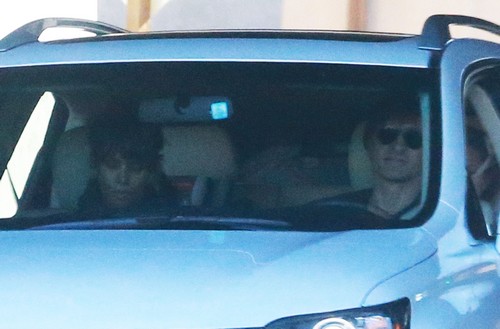 Halle Berry and Olivier Martinez may have an ulterior motive behind their recent divorce filing that has everything to do with money and nothing to do with love. The announcement of Halle Berry’s divorce from her third husband came out of nowhere. Just days before the shocking divorce news. Halle and Olivier Martinez were seen together as they took their 2-year old son Maceo to a Halloween party.

Fast forward to twelve days past their divorce filing, Halle Berry and Olivier Martinez were spotted together again. Despite reports that Halle and Olivier both have fiery tempers and can’t seem to agree on anything, they looked pretty happy together.

According to a report from People magazine, Berry and Martinez were taking Halle’s daughter Nahla to a birthday party. If the estranged couple hadn’t literally just filed for divorce, no one would even think that Halle and Olivier might be having problems.

They got along just fine as cameras snapped away, making it hard to believe that Halle Berry and Olivier Martinez were just sucking it up so they could take Halle’s daughter to a kid party.

So what is really going on with Halle and Olivier? The out-of-work actor recently got slapped with a $5 million lawsuit brought on by an employ at LAX. The suit stems from an altercation back in January where Olivier was caught on camera as he smashed a carseat into Ronaldo Owens. Owens is suing Olivier Martinez and Halle Berry.

The LAX employee claims that the attack was completely unprovoked and that he was not a part of the paparazzi who admittedly were hounding the couple and their children. Owens is suing for assault, battery, negligence and for emotional distress.

The whole incident is caught on film so it won’t be an issue to study the tapes and see if Ronaldo Owens is telling the truth or if he was giving Olivier Martinez and his family a hard time, as Martinez and Berry claim.

Would it be so far-fetched to think that maybe this marriage isn’t ending because Halle Berry and Olivier Martinez want to split or no longer love each other. What if they are actually divorcing because it’s pretty obvious that Martinez will have to pay up for attacking Ronaldo Owens and Halle doesn’t want to part with her money?

Given the fact that the whole incident is caught on film and there’s a really good chance that this is going to cost Olivier Martinez, wouldn’t it be a sound business decision to divorce now and protect Halle Berry’s assets?

Estranged couple Halle Berry and Olivier Martinez make a rare appearance together while heading to a party in Woodland Hills, California with Halle’s daughter Nahla on November 7, 2015. Despite recently announcing their divorce after two years of marriage, Olivier can be seen still wearing his wedding ring! FameFlynet