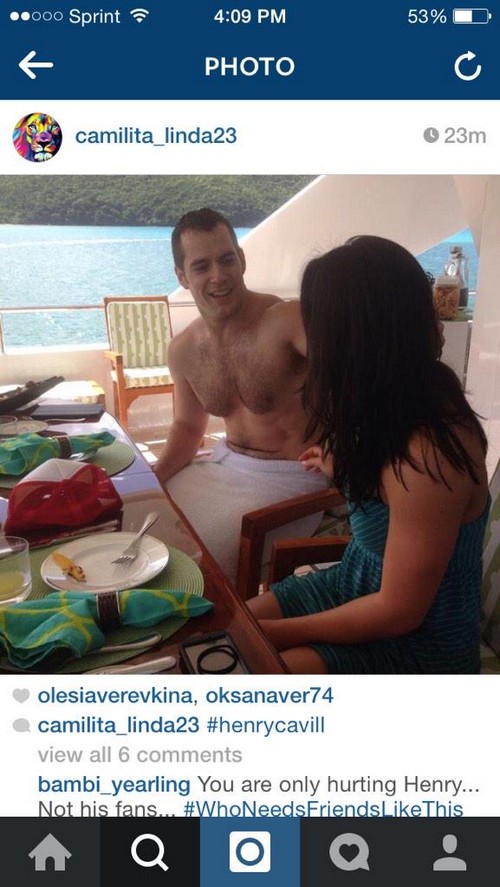 Henry Cavill has ‘officially’ broken up with short-term girlfriend Marisa Gonzalo, according to E! Online. Except guess what? CDL told you guys about this two weeks ago, when it actually occurred – our sources told us it was clear that Henry dumped Marisa the minute they wrapped up their shared yacht vacation.

For those who don’t know the whole sordid tale, here’s the short version: Henry Cavill began dating an animal-killing famewhore-y 21-year-old named Marisa Gonzalo, largely because she ingratiated herself into his life. Despite all the warning signs glaring red, Henry – recovering from his heartbreak over the Gina Carano break up – decided to date this girl. The backlash was swift and immediate, largely because Marisa seemed to have no shame bragging about killing animals and posting the kill shots to her social media pages. Henry’s fans were all furious that he was dating someone like this, especially since he purported to be a big animal rights activist.

Anyway, there were mysterious pictures of Henry and Marisa that also started leaking around the time they started dating, and the pictures only increased in frequency when they went on vacation. Now, the vacation consisted of Henry, Marisa, and two of Henry’s close friends – and yet, there were intimate pictures ‘leaking’ from their yacht? The only logical option was that Marisa was leaking them, which Henry found out fairly quickly. Thankfully, he came to his senses and dumped her a few weeks ago, and has been partying it up in LA ever since.

For whatever reason, E! Online and all the other outlets are hearing about this only now, probably because Henry’s reps decided he needed drastic damage control. Unfortunately, I – and many of his fans – think it’s a case of too little, too late.

Do you guys agree? Can you forgive Henry Cavill for dating such a terrible person, and are you pleased that he finally had the guts to break up with her? Let us know your thoughts in the comments below.

Superman is back on the market! “Man of Steel” star Henry Cavill arrives on a flight at Heathrow Airport in London, England on February 3, 2015. The 31-year-old “Batman v. Superman: Dawn of Justice” star had reportedly just split up with his girlfriend Marisa Gonzalo, though the pair hadn’t been dating very long. FameFlynet