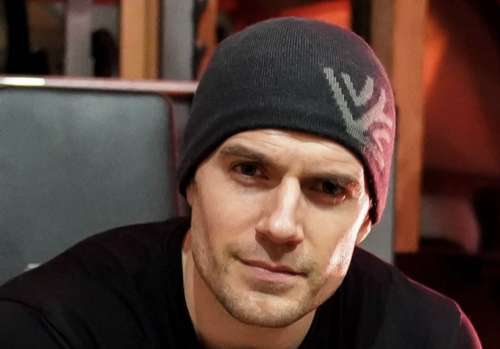 Marisa Gonzalo is all of a sudden Henry Cavill’s girlfriend and photos of the new couple are mysteriously popping up in very mysterious ways! Oh, Henry Cavill. For those of you who don’t know, Henry Cavill recently split with his long-time MMA girlfriend, Gina Carano. Being so focused on privacy, he must have rebounded with an equally lovely, private young woman, right? HAH. That would be a big, fat, NOPE. Henry Cavill has decided to [directly or indirectly] mess with his fans by dating a 21-year-old animal killer who also seems to be famewhore named Marisa Gonzalo.

We initially received tip-offs about Marisa’s relationship with Henry when she went around posting pictures of them together, specifically from Thanksgiving Dinner. Considering that Henry has always been extremely private about his relationships (except for Kaley Cuoco PR showmance stint), it struck us as odd that he could be so blatantly clueless about his new girlfriend. Then again, Henry did date Kaley Cuoco for a hot second last year, and we all know how much of a PR fauxmance that was.

Anyway, it’s odd enough that Henry is dating someone a decade younger than him, and it’s even odder that he’s dating a professed animal killer. This girl has dozens of posts on her Instagram and social media about how she enjoys killing squirrels, and pictures of her holding dead deer. Forget disturbed, this is a whole different level to killing animals that I can’t believe any decent human being would condone – much less DATE. But that’s exactly what Henry is doing – despite being a professed animal lover and working for organizations that help animals, Henry Cavill is dating someone that enjoys killing squirrels and deer and then bragging about it, Marisa Gonzalo.

And even if he was able to look past all that, how do we explain the blatant famewhoring? I’d like to think that Henry Cavill isn’t stupid, but right now, Option A is that he’s really that clueless, or Option B is that he just doesn’t care. Neither make him look good, but the sheer amount of leaked pictures regarding his new romance has to have raised his hackles. For example, Henry and Marisa are currently on a yacht vacation with several close friends, and a picture of Henry and Marisa on the yacht was leaked on Sunday night. However, the account that uploaded the photo was deleted in two hours, so either Henry’s team got a hold of it and told him to shut his new girlfriend down – or she did it so that he wouldn’t find out. But with a limited number of people on the yacht and an intimate photo being leaked, who else would be involved in releasing the photo?

Plus, based on everything we’re hearing, it’s pretty obvious that this girl has been meticulously planning her romance with Henry every step of the way. She stalked him at their shared gym until they ended up hanging out together, and when they started ‘dating’, she made sure that people found out. And now, she’s making sure that people still know they’re together, even if the public [and Henry’s fans] all detest her for it. She’s clearly taunting Henry’s fans, who are all up in arms about why their idol is dating someone so wrong for him.

Now, ideally, I’d like to think that Henry doesn’t fully comprehend the situation he’s in. I’m sure that his team has notified him of the extensive PR damage by now, but it’s not like he can keep checking his name on the Internet while he’s on vacation. But let’s just say that he’s not a total moron, and that he does know that his new girlfriend is leaking pictures of them together. That means that he’s genuinely doesn’t give a rat’s ass what his fans think, and that he really is a hypocritical idiot who doesn’t deserve his success.

If he doesn’t know that his girlfriend Marisa Gonzalo is leaking all these pictures behind his back, then he’s just stupid. Neither option makes him look very good, and in fact, they are just continuing to drive his fans further and further away.