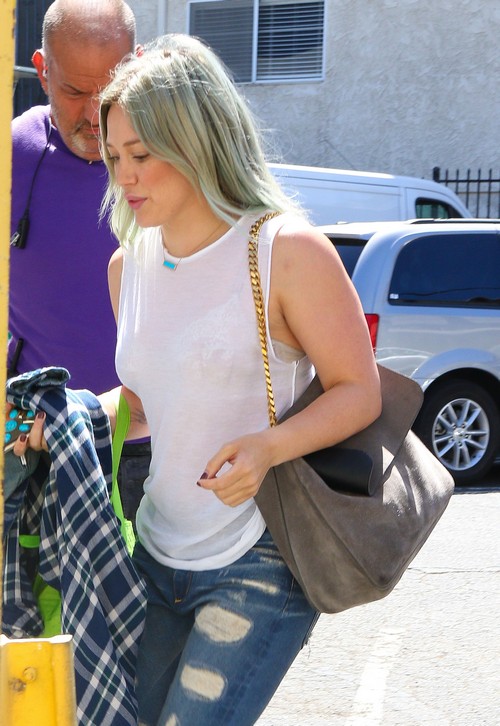 Hilary Duff’s estranged husband, Mike Comrie is fighting for joint custody of their 3-year-old son Luca in what is becoming an ugly divorce. Reports are that Comrie has recently responded to Duff’s divorce filing but is demanding joint custody. In the document, obtained by TMZ, the former hockey star says that he wants to share custody of Luca. In the initial report, filed by Hilary Duff, the actress asked for primary physical custody of Luca, giving Mike Comrie visitation rights only.

Sources revealed to TMZ that Hilary is worried about Mike’s parenting skills. She believes that he is an unfit father because of his partying ways, and she does not want him to have anything to do with raising their 3-year-old son. Hillary Duff filed for divorce the day before Comrie allegedly propositioned women, while being intoxicated, at Mastro’s in Beverly Hills. An inside sources tells US Weekly, “Hilary finally realized Mike was not going to change. He totally blew it and chose to live life like he was single.”

Hilary Duff is trying to keep the divorce as amicable as possible. In a recent interview with Cosmopolitan, Duff said, “It wasn’t working well enough to stay together, but there was still a lot of love involved. It was just a slow set-in of us not being the match that we used to be. I’m lucky for the person he is and I am and how we decided to handle this.”

Unfortunately, it looks like things will get a little messy now. The couple did have a prenuptial agreement, and both sides acknowledged this agreement, however it seems that poor Luca will be stuck in a heated war between father and mother.

The worst part of celebrity divorces is the fact that the kids have to go through so much, in the public. We hope that these two can put their differences aside and grow up, so that their son does not have to suffer the consequences.

A child needs their mother, and if Mike Comrie cannot stop his partying ways, Hilary Duff will probably get primary custody of their son. It is a simple as that. Let us know what you think in the comments below.