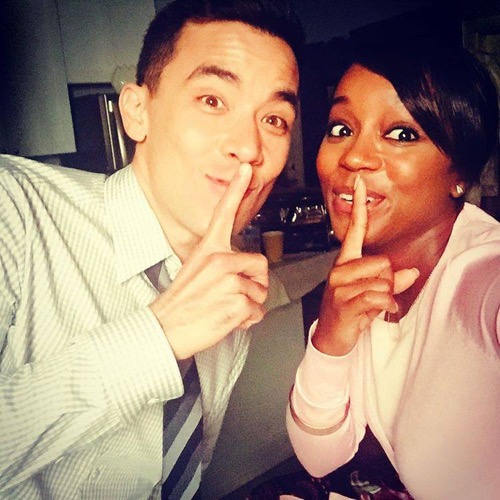 Tonight on ABC How to Get Away with Murder starring Viola Davis continues with an all new Thursday November 19, season 2 fall finale recap called, “What Did We Do?” and we have your weekly recap below. On tonight’s episode, Sinclair (Sarah Burns) gets a big break in the Hapstall case.

On the last episode, Philip posed a major threat; Sinclair thought she could finally gain the upper hand on Annalise; Caleb and Catherine made an important decision that could change their lives forever. Did you watch the last episode? If you missed it, we have a full and detailed recap right here for you.

On tonight’s episode per the ABC synopsis “Sinclair gets a big break in the Hapstall case, but it has calamitous results as details are learned about the night Annalise was shot—including the person who pulled the trigger.”

Tonight’s episode is going to be great, which you won’t want to miss. So be sure to tune in for our live coverage of ABC’s How to Get Away with Murder season 2 fall finale — tonight at 10PM EST! While you wait for our recap, hit the comments and let us know how excited you are about this episode.

Tonight’s episode of “How To Get Away With Murder” kicks off with Michaela and Connor at Caleb’s house arguing. Caleb called them for help because he found a gun in the house – its his sister Catherine’s. Connor wants to call Analise, but Michaela thinks that they should elave Analise out of it and get rid of the gun ASAP so that the DA will continue to charge Philip with their parents’ murders. Catherine walks in and sees them all arguing over her gun, she runs away.

Meanwhile at Annalise’s office – a situation has come up, they found a picture that Catherine painted at Phillip’s house, it turns out that they knew each other. Annalise heads to Catherine and Caleb’s house and learns that Catherine ran away, and that Caleb found her gun in the house. She is furious that Michaela didn’t call her. At the police station, Sinclair is accusing Nate of tampering with Phillip’s arrest record. She screams at Nate that he is doing Annalise’s dirty work.

Annalise tells Caleb that she is dropping Catherine, she can’t represent both of them because it is obvious that Catherine is guilty and it is a conflict of interest. Annalise calls Frank and tells her to find Catherine ASAP, before she does something stupid. Meanwhile, Bonnie shows up at Asher’s house, he is on the phone trying to get a hold of his dad. Bonnie has bad news – apparently Asher’s dad is dead, it looks like he committed suicide by hanging himself.

Nate calls Annalise, he tells her that he thinks he is about to get fired. Nate tells Annalise about his huge fight with Sinclair. Laurel interrupts Annalise to give her the bad news about Asher’s dad. Asher heads ot his mother’s house to help her make the funeral arrangements. She doesn’t understand why Asher is so calm, cool, and collected – she accuses him of being happy that his father is dead. Asher’s mother tells him that it is all his fault his father committed suicide, he storms out and has a meltdown in his car. Bonnie feels horrible, she confesses to Frank that it is all their fault – if Annalise hadn’t leaked Millstone’s secrets then he wouldn’t have killed himself.

The law students are concerned, they haven’t heard from Asher all day. Michaela thinks they should call him – but she realizes that no one actually has Asher’s phone number. She scoffs to Connor and Michaela that they are officially the worst people ever.”

At her house, Nate calls Annalise and tells her that they have another Sinclair problem. Annalise hangs up, and begins panicking. Annalisa rushes back to Caleb’s house, he tells Caleb to leave with Michaela because Sinclair is on her way over there. Annalise says that she is going to give up Catherine and tell Sinclair that Catherine had a gun and knew Phillip.

Sinclair shows up at Caleb’s house, Annalise marches downstairs and orders the law students to stay where they are. A car pulls up outside, Bonnie is driving though. She pops the trunk and shows Annalise that she has Sinclair’s dead body in the trunk. Annalise scoffs that Sinclair “did this to herself.”

Flashback – earlier that day after Nate and Sinclair got in a fight, Sinclair files a harassment charge against Nate. Nate informs his police captain that he is planning on counter-filing a harassment case against Sinclair for being racist. After work Sinclair met Nate in the parking garage, she offered to drop the lawsuit if he helped her put Annalise away in jail. Nate turned her down and left, then Asher arrived – he accused Sinclair of being the reason his father committed suicide. Asher freaked out on Sinclair and ran her down with his car and killed her.

Bonnie called Annalise for help, she comes up with a scheme and tells Bonnie not to let Asher go to the police and to meet her at Caleb’s house. Before she went to Caleb’s house, she called Frank and told him to go get a bottle of pills out of her office – Frank says that he found Catherine, she is staying in a motel in Camden.

Asher, Bonnie, and Annalise drag Sinclair’s body inside of the house. Laurel, Connor, Michaela, and Wes are shocked. Connor says that this whole thing is insane and he is walking out. Annalise snaps at the law students that if they never killed Sam, all of this wouldn’t have happened, and Asher’s dad and Sinclair would still be alive right now. So, since it is all their fault – they have to help her clean up the Sinclair mess by staging her death at Caleb’s mansion.

Annalise announces that they are going to frame Catherine, and say that she came home unexpected and found them in the house and killed Sinclair because she didn’t want to go to jail. Meanwhile, Frank is on the way to Catherine’s motel with the pills. The law students get to work dragging Sinclair’s body up to the roof of the mansion. Connor and Michaela quit, they tell Bonnie they don’t want anything to do with another murder. Inside the house, Wes calls Nate for help and tells him that Annalise has lost it and is trying to frame Catherine with Sinclair’s murder. Bonnie and Asher push Sinclair’s dead body off the roof and it crashes to the ground in front of the house.

Bonnie stomps downstairs and tells Connor that he needs to get on board or else he will be the next dead body outside. Meanwhile, Asher starts to have a meltdown – he cries that it is not going to work, there is no way the police are going to believe that she died from falling off the roof. He is certain that they are all going to get caught. Bonnie snaps for someone to go put Asher in the car.

Bonnie leaves with Asher to drive him home, she stops at a gas station to wash the blood of herself in the bathroom. Then they take the car through the car wash to rinse off Sinclair’s blood from the bumper. Meanwhile, Frank has kidnapped Catherine and is drugging her in the back of his car. Phillip is busy looking all over for Catherine, he pulls up to her driveway.

Inside the mansion, Annalise tells the law students that the only way that their plan will work is if they make it look believable. Annalise gives Connor the gun and tells him to shoot her in the leg, Connor takes the gun – and cries that he hates Annalise and then he drops it on the floor. Annalise is panicking – she already called the cops and told them that Catherine shot her. She tries to give Wes the gun, and begs him to shoot her, but he refuses. Wes takes the gun and tries to leave – Annalise calls after him, “Rebecca is dead, I’ve lied to you over and over.” Wes turns around with the gun and shoots Annalise – not in the leg though, in her stomach.

While Ananlise is lying on the floor gasping for air, Annalise calls him “Christophe.” (Which is Wes’s real name.) Wes has a flashback to when he was a little boy – a woman is interrogating him at the police station about his mother, she was killed. Annalise is watching from the other side of the double-sided glass, her partner says “Good God Annalise what did we do?”