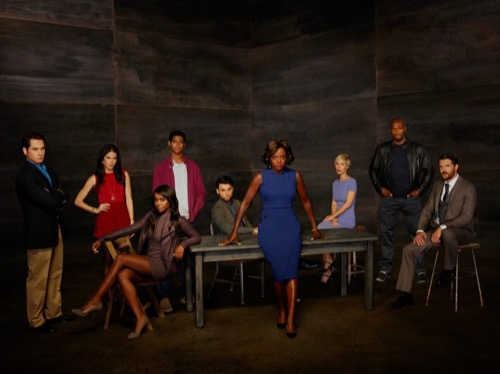 Tonight on ABC How to Get Away with Murder starring Viola Davis continues with an all new Thursday November 12, season 2 episode 8 called, “Hi, I’m Philip” and we have your weekly recap below. On tonight’s episode, Philip (Jefferson White) poses a major threat; Sinclair (Sarah Burns)  thinks she can finally gain the upper hand on Annalise. (Viola Davis)

On the last episode, Eve defended Nate when he’s served for another murder charge. Meanwhile, Annalise and the team represented a client who allegedly made a person suicidal; and Bonnie discovered the gory details about what went on at Trotter Lake. Did you watch the last episode? If you missed it, we have a full and detailed recap right here for you.

On tonight’s episode per the ABC synopsis “Philip poses a major threat; Sinclair thinks she can finally gain the upper hand on Annalise; Caleb and Catherine make an important decision that could change their lives forever.”

Tonight’s episode is going to be great, which you won’t want to miss. So be sure to tune in for our live coverage of ABC’s How to Get Away with Murder season 2 episode 8 — tonight at 10PM EST! While you wait for our recap, hit the comments and let us know how excited you are about this second season.

Tonight’s episode of “How To Get Away With Murder” kicks off with a scene from the night that Annalise is shot. Bonnie is marching through the mansion where Annalise is lying on the floor gasping for air. Conner is whining, as usual, he and McKayla just tried to sneak away. Bonnie tells them to “get on board or they are the next dead body out there.”

Flashback – Bonnie is having a meltdown, she is sitting in the shower and replaying her argument with Annalise in her head. She told Annalise that she wanted her dead after she learned that Annalise told Asher she was molested as a child. Annalise isn’t too torn up about their fight, she is at home in her robe snapping selfies and texting them to someone. There’s knock at her frontdoor – Nate is at her house. She invites him inside. Nate taunts Annalise and says that he should kill her, but instead he breaks down in tears. Annalise refuses to have sex with Nate and tells him to sleep on the couch – she isn’t going to “spread her legs as some sort of payment for what she did to him.”

Frank, Laurel, McKayla, and Connor just left the diner where they were trying to catfish Phillip – the ousin that they think killed the twins’ parents. Little do they know, Phillip is a computer guru and decided to go straight to Oliver’s house to meet him. Oliver is in the kitchen with Phillip and begging him not to kill him – Frank drops Connor off outside. He heads upstairs and Oliver is gone – the refridgerator door is wide open and there is spilled milk on the floor.

Connor rushes to Annalise’s house and tells her that Frank got his boyfriend Oliver kidnapped. Everyone arrives at Annalise’s, Connor wants to call the police. Nate is already at the house – he agrees to help. Frank says that they can’t call the police because Sinclair will bring them all down for hacking Phillip’s computer illegally and trying to set him up. While they are all standing there and bickering, Oliver arrives at the house … with Phillip. He sits down and has a chat with Annalise, he threatens to go to the police or sue her. Phillip says that he will let Annalise know when he figures out what he wants.

The next day, they devise a plan – they need to pin the Hapstall murder on Phillip before he goes to the police and gets them in trouble for hacking his computer and setting him up. They take a straw that Phillip drank out of to the lab to test his DNA, meanwhile – Nate decides to tail Phillip and make sure he doesn’t go meet with a lawyer. At the office, Annalise tells Laurel that she needs to be the new Bonnie – her old Bonnie hasn’t been to work sine their huge fight.

Annalise calls in Catherine and Caleb and fills them in on Phillip and the DNA test that they are waiting for. While they are talking, Sinclair calls – apparently she has a change of heart and she wants to offer Catherine and Caleb a plea deal in the murder case. Caleb is seriously considering pleading guilty – he would rather Xserve 15 years for a crime that he didn’t do that the rest of his life. Annalise tells McKayla to go to Caleb’s house and convince him not to take the plea deal. Meanwhile, Wes talks in private with Catherine and tells her that she should take the plea deal. When Annalise finds out, she is livid – Wes breaks down and says that he wishes he had come clean about killing Sam. Annalise says that his feelings are clouding his judgement and sends him home until she says otherwise.

At the DNA lab, Asher and Frank still haven’t gotten their sample back. The technician says tht she is backed up because Sinclair dropped off like 300 samples of her own to be tested. Asher realizes that Sinclair knows what they are up to. He remembers that she had about 20 boxes of evidence dropped off at Annalise’s office the day before – there had to be a bug in the boxes. Annalise’s office is wired, and Sinclair knows everything that they have done and has overheard their conversations.

Annalise and the students head back to the office – they begin trashing the boxes of evidence and paperwork from Sinclair’s office. While they are searching for the bug, Catherine calls them crying – Caleb talked to Sinclair and he took the deal. He agreed to do 30 years in prison for the crime that he didn’t commit – to get Catherine off scott free. Asher finds the bug, Annalise decides to use it to her advantage. She talks in to the bug and says that Caleb confessed to everything and said that he hid the gun in the basement.

Annalise’s plan works perfectly – Sinclair takes back the plea deal that she offered Caleb. And, then she searches the entire house and doesn’t find a murder weapon, so now Annalise can throw the fact that she obtained a search warrant illegally and didn’t even find anything in Sinclair’s face when they head back to court. But, as Annalise is leaving the Haspalt house she gets a phone call from Nate – Phillip is at the police station and he is giving the police a statement about Annalise and her students hacking his computer and trying to frame him. Nate forges an arrest record and makes it look like Phillip is schyzophrenic and has already turned multiple people in for stalking him so that no one will take him serious.

Meanwhile, Annalise gets another phone call – now Catherine is meeting with Sinclair and is taking a plea deal for the murder of her parents. Annalise rushes to court, Frank shows up at the last minute with the results from Phillip’s DNA test. When Catherine sees the results, she changes her mind and tells the judge that she is not pleading guilty after all. After court Annalise gives the DNA test results to Sinclair – not only was Phillip at the scene of the crime, but he has incest traits in his DNA, he was the son of Helena and her brother. Annalise scoffs, “Good luck getting the jury to believe that the incest wierdo didn’t do it.”

Tonight’s episode ends with Wes getting a delivery – it’s one of Catherine’s paintings that he complimented at the mansion earlier. Nate shows up at Annalise’s door – he has good news, the police chief has launched a formal investigation in to Phillip first thing in the morning.