Ian Somerhalder and Nikki Reed Marriage Trouble: Ian to Quit ‘The Vampire Diaries’ to Be a Dad Before Show Cancelled? 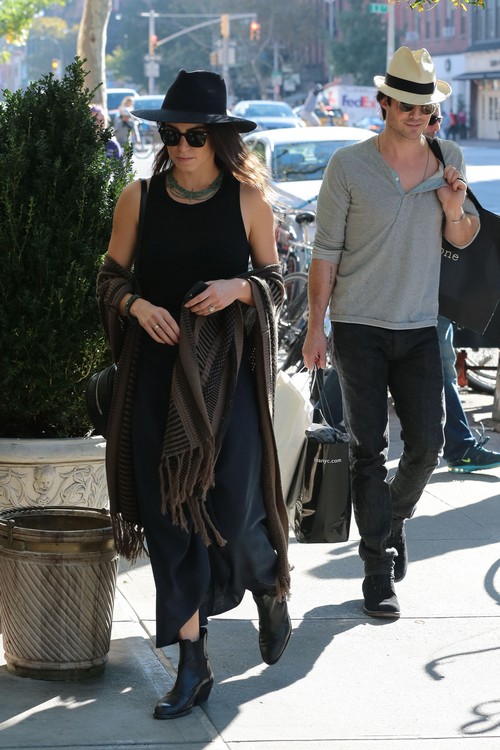 Ian Somerhalder and Nikki Reed’s marriage might be in trouble. Ian is tempted to quit ‘The Vampire Diaries’ to be a dad before TVD is cancelled, but Nikki still doesn’t want to jeopardize her career by having baby. Ian’s desire to start a family and Reed’s focus on her career is taking a toll on the couple’s relationship.

‘The Vampire Diaries’ is not doing well without Nina Dobrev’s character, Elena. Despite Somerhalder and the cast’s repeated attempts to tease viewers of Nina’s possible return, TVD’s rating are dropping.

The show is losing momentum and has been moved to Friday night, which is usually the kiss of death for most shows. Dobrev was smart enough to jump ship before the show ended and Ian Somerhalder might follow her lead. It’s easier to say, “I left the show,” versus being cancelled.

So, Ian feels this is the perfect opportunity to quit and become a dad. Somerhalder turned 37 on December 8, and staring down 40 makes his baby fever even worse. In fact, Ian Somerhalder’s desire to settle down and have a family is what ended his relationship with Nina Dobrev. Nina didn’t want to get married, let alone have a baby and the TVD stars split.

Nikki Reed was happy to marry Ian, but the baby plans have been tabled. Nikki is focused on her career and is marginally successful thanks to her Twilight role. Reed hadn’t had any career-making roles since Twilight, but she did score a role on ‘Sleepy Hollow.’ With a toe in the door, Reed won’t be ending her chance at becoming an A-list celebrity with a career-ending pregnancy.

A disconcerting sign of Ian and Nikki’s struggling relationship raised eyebrows when Reed didn’t take the opportunity to gush about her husband’s birthday. Normally, the couple loves to share images of themselves cuddling and sharing heartwarming moments.

However, Reed was uncharacteristically quiet on Somerhalder’s birthday. Perhaps it’s a fluke, but missing out on a prime social media moment is odd.

What do you think of Ian Somerhalder and Nikki Reed’s marriage trouble? Will Ian quit ‘The Vampire Diaries’ to be a dad before the show is cancelled? Let us know your opinions in the comment section below and don’t forget to check back for more news and details for TVD, Ian Somerhalder, Nikki Reed, and Nina Dobrev.