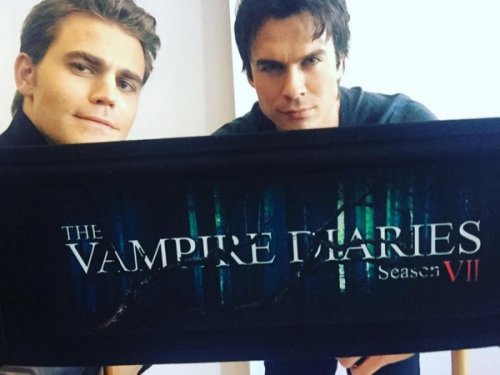 Is Ian Somerhalder in a panic after “The Vampire Diaries” was pushed to a Friday timeslot? Could this be TVD’s final season? The CW flagship show may be showing signs of a series end after losing its standard Thursday night time slot.

When a show gets assigned to Friday night, it’s usually a death sentence. “The Vampire Diaries” has enjoyed its Thursday night slot since its premiere, but starting January 29, the fan-fave series will make the move to the dreaded Friday night slot.

Fans were quick to notice the time change announcement and have already begun to worry the vampire-werewolf-heretic show might be headed towards its final season. But not every program that moves to Friday meets a quick end.

Bones is faring well on Friday, but it’s hard not to notice that Nina Dobrev’s departure from the show has caused problems for “The Vampire Diaries.” The cast is reportedly growing tired of Ian Somerhalder hogging the spotlight now that Nina is out of the picture.

Ratings dropped by 33% with the season 7 return of The Vampire Diaries. Ian Somerhalder might be going into panic mode as the show appears to be sinking. Nikki Reed, Ian’s wife post-Nina Dobrev relationship, has reportedly been pushing Ian towards a movie career and this could be why.

Or maybe Nikki wants to end the Ian Somerhalder and Nina Dobrev stigma for good. Even though Nina has repeatedly stated she will not return to TVD, rumors still persist her character, Elena, will make another appearance in the show.

Several media outlets ran with CDL’s report of Ian’s diva behavior irking his cast mates. They went as far as claiming “The Vampire Diaries” cast wants Somerhalder fired so Dobrev could return. But those reports exaggerate the on-set friction that is actually happening.

The real concern for the cast right now is whether or not the show can survive the move to the Friday night time slot. What do you think of “The Vampire Diaries” moving to Friday? Is it a sign the series is struggling? Will CW end TVD if it continues to dip in ratings? Let us know your thoughts in the comment section below.