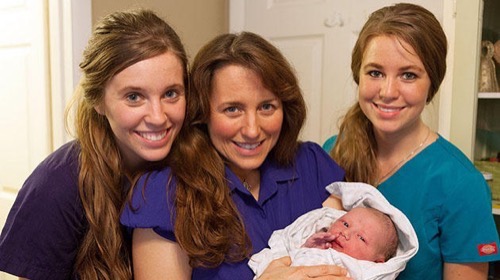 Jana Duggar is putting her foot down and demanding that her parents Michelle and Jim-Bob buy her a car. Jana is actually the eldest of the Duggars’ daughters – however, since she hasn’t been married off in a televised wedding, she is still living under their roof and basically her parents’ live-in nanny. Since Jana’s sisters Jessa and Jill’s recent weddings, Jana has been the center of a media frenzy and reportedly fed up with raising all of their children for them. A new report reveals that Jana feels she should be compensated for everything she does for Michelle and Jim-Bob, and has asked the to buy her a car.

The May 25 edition of OK! Magazine reveals, “the supersize clan’s eldest daughter is sick of carpooling and is requesting her own ride.” According to OK!’s inside source, “The family shares four SUV’s but if they are all in use Jana finds herself stuck. She let her parents know that she wants her own car, it’s the least they could do considering how much she helps out around the house.”

If you aren’t familiar with 19 Kids And Counting, then Jana Duggar probably sounds like a spoiled brat. What 25 year old demands her parents buy her a car? But, Jana basically has devoted her life to raising her younger siblings, and reportedly spend more time caring for them than her own parents do. And, Michelle and Jim-Bob have bought Jessa and Jill both cars and houses when they were married. So, doesn’t Jana deserve the same? Or are they punishing her for not getting married and immediately popping out babies in traditional Duggar fashion?

Do you think that Jana Duggar deserves a car? It’s not like her parents will let her run off and get a job and earn money to buy herself a car. Or is she being a little too demanding? Let us know what you think in the comments below!