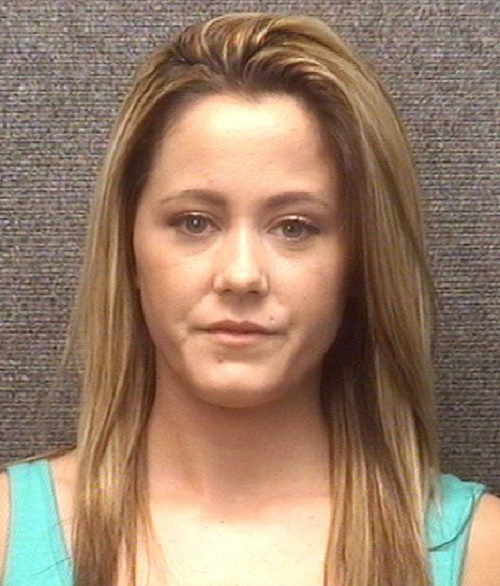 Teen Mom 2 star, Jenelle Evans, 23, has been arrested. Myrtle Beach police in South Carolina put the warrant out for Jenelle’s arrest on Wednesday, May 27, and TMZ is reporting that the MTV reality star has turned herself into cops.

In the mugshot, Jenelle can be seen wearing a turquoise tank top, and looking like she does not even care that she’s been arrested again. Evans is being charged with domestic violence and, according to a source that spoke with Us Weekly, MTV was there to capture every minute of the arrest. That source says that the Teen Mom 2 camera crew followed Evans as she went to the police station to turn herself in.

All of the drama started on May 26 when Jenelle Evans allegedly went to her ex-fiance Nathan Griffith’s house uninvited and attacked him. Griffith filed a police report which stats that Griffith, the father of Evan’s son, Kaiser, was left with bruises and scratches all over. According to Us Weekly, Griffith was then pressured to press charges against Evans, even though he did not want to.

After all of this went down, Evans took to Twitter and retweeted her PR account which stated that Griffith started the altercation by trying to run her over with a car.

Evans’s lawyer, Amy S. Lawrence, spoke with Us Weekly exclusively and said, “She’s just…I think that in her heart she thought that maybe with them breaking up that they would get back together because they have a child together. I think she’s just very hurt that he has moved on.”

Lawrence went on to allege that Griffith is doing his best to drop the charges. She says, “He will do everything that he can to get these charges dismissed for Jenelle. He understands that she’s hurt because they’ve broken up, and he’s dating somebody else and things escalated in a way they shouldn’t have. But he does not want her to have any kind of criminal consequence for this.”

What do you think? Should Griffith drop the charges or does Jenelle deserve to be punished for her actions? Let us know in the comments below.