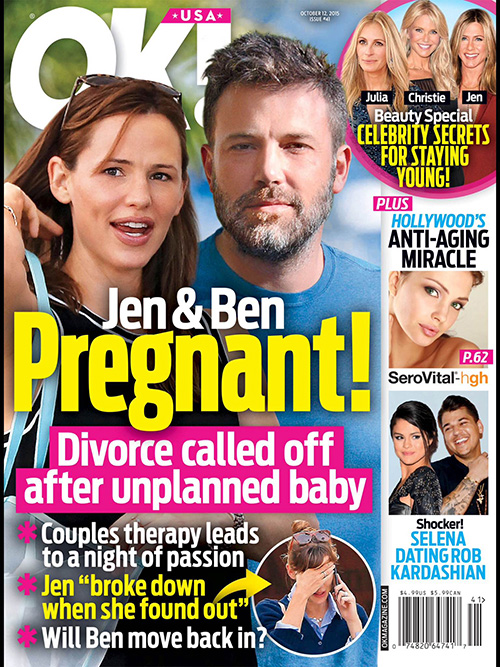 Jennifer Garner is pregnant! Jennifer Garner and Ben Affleck’s split shocked the world earlier this summer, and after news of Ben’s alleged affair with nanny Christine Ouzounian, it seemed like it would take a miracle to repair their relationship. But, according to this week’s cover of OK! Magazine, a miracle is exactly what the couple received and they have decided to call off their divorce in lieu of an unexpected pregnancy.

This week’s OK! Magazine cover features a photo of Jennifer Garner and Ben Affleck, the headline screams, “Jen & Ben Pregnant: Divorce Called Off After Unplanned Baby!” The magazine goes on to say that not only has Jennifer forgiven Ben for cheating on her with their children’s nanny – but she has also decided to take things slow and started dating him again. Jen’s sudden change of heart was inspired by learning that she was pregnant with baby number four.

According to OK! Magazine’s inside sources, Jennifer and Ben are happier now than they ever were before. An insider close to the couple dished to the tabloid, “Jen admitted that she can be judgmental and harsh in the ways she speaks to Ben, especially when they are fighting. And, she has been making a real effort to be direct with him now, instead of her usual passive-aggressive behavior. They have never been as honest and raw with each other as they have in the past few months.” Jen and Ben were recently spotted on a romantic date together – and onlookers were impressed with how happy they seemed, you never would have guessed they were in the process of a divorce.

Jennifer Garner and Ben Affleck’s close pals are certain that the reason Jen forgave Ben and they are working on their marriage is because she is pregnant with baby number four. An insider dished to OK!, “Something is definitely going on. She keeps telling everyone how exhausted she is, and she has told a few close friends that the only times she has ever experienced this extreme fatigue was in the early stages of her previous pregnancies.” At this point, Jennifer being pregnant is really the only logical explanation as to why someone would forgive their husband for publicly embarrassing them and cheating with the hired help.

What do you guys think? Do you believe the rumor: Jennifer Garner pregnant? If you were in her situation and found out you were pregnant, would you call off the divorce too? Let us know what you think in the comments below!