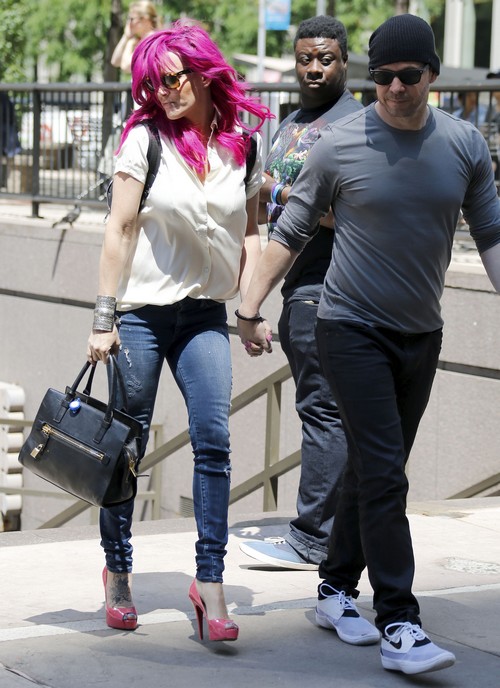 Jenny McCarthy and Donnie Wahlberg’s marriage is in trouble and if Jenny doesn’t make some changes Donnie might call it quits and divorce – apparently Jenny has a hard time letting Donnie wear the pants. Jenny has raved about how much she wants to be just a regular little Suzy Homemaker, but deep down inside she has no desire to answer to her new husband and become the dependent Mrs. Wahlberg she insisted was the perfect role for her.

The stars of the reality television show “Donnie Loves Jenny” are close to ending their 14-month marriage in divorce according to a new report. McCarthy may say she wants to change from being a free-spirited wild child but what’s going on at home tells a different story.

An insider revealed to Star, “Donnie expects Jenny to behave like a wife, cooking and taking care of the family instead of relying on outside help.” And even though that’s what Jenny said SHE wanted – “I want to be dependent and a girl and a wife and domesticated. I want to be Mrs. Wahlberg” Jenny McCarthy gushed during an interview in February 2015.

All that talk about being the happy little homemaker is just that – talk. Reportedly Jenny can’t stand Donnie Wahlberg’s “alpha male act” and her BS is going to push him right out the door and to his lawyer’s office to draw up divorce papers.

All this after sharing their love with the world during the very first episode of “Donnie Loves Jenny” – the episode was titled “The Wedding.” But the same things that drew Donnie to Jenny are the things that are driving him nuts now. Jenny will get a tattoo or dye her hair just because and that really gets Wahlberg upset. “He tells her to act like an adult.”

Add to that the fact that Jenny McCarthy and Donnie Wahlberg have very different parenting methods and that’s taking it’s toll on their blended family – Jenny has one son and Donnie has two. McCarthy wants to be in charge of everything. “She won’t let him take being strong father figure,” the insider explains. And, at this point, the couple may only remain together to squeeze whatever fame they can out of their reality show. “Once it’s over, their relationship could be too.”

Sounds like Donnie wanted one thing in a wife and Jenny gave good lip service saying that’s what she wanted too. But when it came time to deliver on the promise of being a dependent domestic goddess Jenny just couldn’t keep up her end of the bargain.