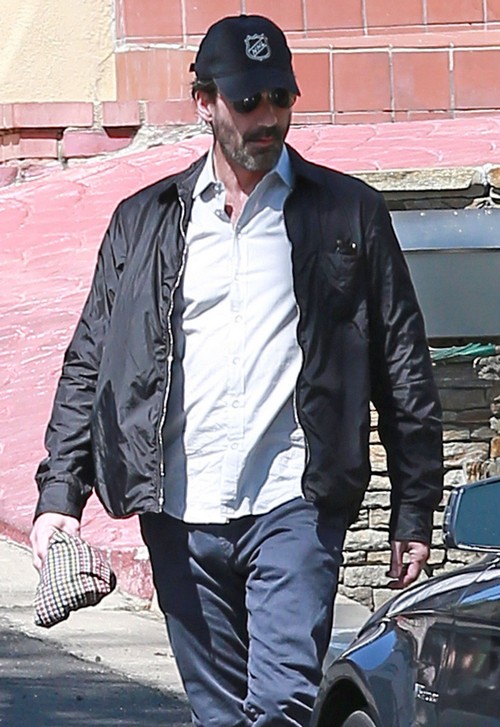 Jon Hamm has a lot of secrets, doesn’t he? Well, he did hit it ‘big’ much later in life, so he’s bound to have collected a few skeletons in his closet that the public doesn’t know about. He already hid the fact that he secretly completed a 30-day stay at a rehab center for alcohol addiction, but this one is a much bigger shocker; according to Star Magazine, Jon Hamm was once issued an arrest warrant for assault claims over a ‘hazing incident gone wrong’.

Star’s report claims that Jon Hamm and his Sigma Nu frat brothers beat up a prospective pledge student with a wooden paddle, beating him over thirty times with it. The report also adds that Jon lit the student’s pants on fire, elaborating, “he would not let [the pledge] extinguish the flame with his hand but made [him] blow it out.”

The details continue on in this vein, and the mother of the pledge reportedly complained, bringing charges down on Jon Hamm and seven of his fraternity brothers. Hamm was reportedly charged with misdemeanor hazing and assault charges, but they were dismissed in 1995 after reaching a plea deal.

Of course, a source [probably Jon’s rep] told Star, “The hazing incident was an isolated incident in Jon’s life. Since then, he’s been strong enough to take steps to make himself a better person.”

Well, apparently not too much better, considering the alcohol addiction and the rumors of all the cheating and partying. We don’t want to pigeon hole a celebrity without knowing the details, but Jon has kept a large part of his life hidden from the public, and all the little crumbs are slowly starting to leak out.

What do you guys think about Jon Hamm being charged with assault when he was in college? Should he be given a get-out-of-jail-free card because he was young and stupid, or should he be held responsible – even now? Let us know your thoughts in the comments below.