Joan Rivers Death Cover Up: Could Doctors Be Arrested for Criminal Errors? 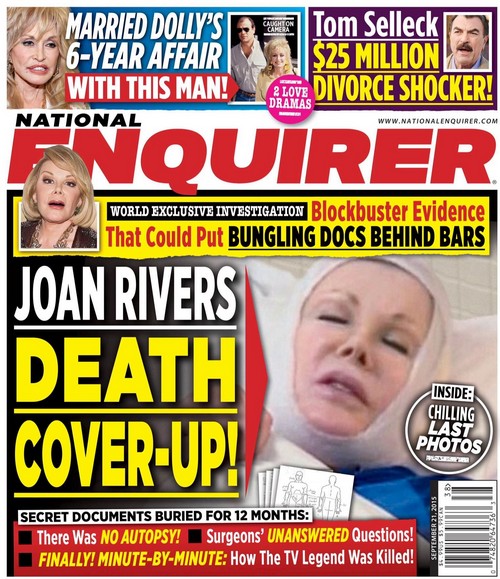 The National Enquirer is reporting the results of a year-long investigation into Joan Rivers’ untimely death and their findings are shocking. The tabloid says that there has been a major cover-up and the actions of the doctors involved was so sketchy that they could face manslaughter charges. Here’s a look at some of the horrible dirt The Enquirer uncovered.

#1 Lifesaving measures were delayed
The Enquirer reports that 19 minutes passed between when they realized Joan Rivers was in trouble and CPR was started. That delay could well have contributed to her heart attack, coma and eventual death.

#2 No autopsy was conducted
The tabloid says that no autopsy was conducted even though the circumstances surrounding her death were questionable, at best. This may be due to her Jewish faith, but with so many questions, the medical examiner could (and should) have pushed for a post-mortem examination.

#3 Unauthorized procedures performed
Dr Gwen Korovin performed “unsanctioned procedures” on Joan Rivers and her presence wasn’t listed in the medical record – a side note from another doctor was the sole mention. If not for this note, investigators may not have known the woman was in the room when she should not have been.

#4 Doctors misstated procedures
The tabloid reports that Dr Lawrence Cohen wasn’t honest when he stated that he performed one procedure when, in fact, he performed two procedures on Rivers when she had consented to only one. It was after the second procedure that Joan Rivers went into distress.

#5 Excessive anesthesia
The National Enquirer spoke to an expert, Dr Wecht, who said the use of 120 mg of Propofol was the real issue in the case. According to Medscape, for an adult age 55 and older, 20 mg is adequate to sedate the patient with 1/10 of a mg to keep the patient sedated. Based on the expert info on Medscape, 120 mg seems excessive which aligns with the assessment of The Enquirer’s medical expert. She was initially knocked out with 100 mg, more than five times what Medscape’s professionals list as normal.

#7 Evidence allegedly destroyed
Another Enquirer private investigator, Danno Hanks, said the clinic’s attitude was likely, “We screwed up. Let’s get rid of this evidence before the authorities ask for it.” When the medical examiner asked for the records two weeks later, they were already gone! If true, that alone should result in obstruction of justice charges.

#8 Inappropriate doctor behavior
Dr Gwen Korovin, the doctor who, according the tabloid, was not authorized to perform any procedures yet did, also took time in the OR to snap a selfie of herself with a sedated Joan Rivers. It’s one thing to snap a photo with a conscious patient with permission but quite another to take a picture of an unconscious celebrity patient. That seems like an extraordinary violation.

The tabloid also spoke to a criminal defense attorney who said there “should be an investigation into whether this is criminal negligence.” The destruction of records immediately following a death should be enough to raise eyebrows with official investigators looking into the circumstances surrounding Joan Rivers’ death. Looks like The Enquirer is onto something here…