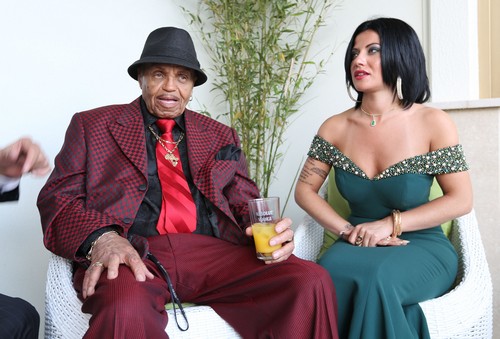 In late July, Michael Jackson’s father, Joe Jackson suffered a stroke in Brazil where he was seen partying in Sao Paulo celebrating his 87th birthday. He was hospitalized on July 26 at the Albert Einstein Hospital and placed in intensive care. The stroke was followed shortly after by a heart attack where his heart stopped three times. The controversial Jackson family patriarch has previously suffered three other strokes and the family was led to believe it was the risk history that caused this incident as well – but it was not!

Instead, Joe Jackson’s latest stroke and heart incident was caused by an overdose of erectile dysfunction drug Viagra according to this week’s edition of GLOBE. Jackson was reportedly near death but was able to be revived after partying with a woman more than 60 years younger than him – 25 year old Angela Stilitti – along with a bevvy of other young women. Jackson had taken them out bar hopping with him and insiders say his second night in Sao Paulo was when Jackson made the near-fatal mistake of mixing booze with three Viagra.

The next day he woke and was dizzy and then suffered the stroke which caused the eldest Jackson to also blow a blood vessel in his eye. Sao Paulo heart surgeons installed a pacemaker to help stabilize Joe Jackson and he has recently returned to LA via private jet in the company of three of his offspring. Ironically, it was the first stroke Jackson suffered several years ago that led to his erectile dysfunction issues and that was when he started using Viagra to keep up with the much younger ladies in his life.

You would think that everyone related to Michael Jackson would know by now to shy away from drugs period, much less drugs taken to excess. Three times the Viagra does not equal three times the fun, but apparently did equal three times the heart stoppage for old Joe. Joe Jackson was spotted all over Sao Paolo in the company of Angela Stilitti, a French singer whose career he reportedly “manages.”

Prior to his medical incident, Joe Jackson posted on his website, “Nothing but love from Brazil. Sao Paulo is showering me with love and kindness.” Instead of enjoying his $200k birthday bash, Joe Jackson ended up spending his birthday in the hospital bordering on death. Of note is that none of his children were in Brazil to celebrate his 87th.

That makes sense, as most of his children have accused him of abuse – both physical and emotional – although Joe Jackson told Piers Morgan in 2013, “I’m glad I was tough” and added “there’s no such thing as beating a kid… you whip them or punish them over something they did and they will remember that.” Likely they did remember it and that’s why Joe Jackson was boozing and popping Viagra among strangers and then almost died.

Janet Jackson did show up to accompany her father from Brazil back to LA and his ex Katherine Jackson is reportedly helping care for him while he recovers, but none of the kids rushed to be by his side. Perhaps they were hoping that karma made an appearance in Joe Jackson’s life – at long last – and they would be rid of him and his heavy handed ways. No such luck – Jackson is still kicking and looks to be on the mend.