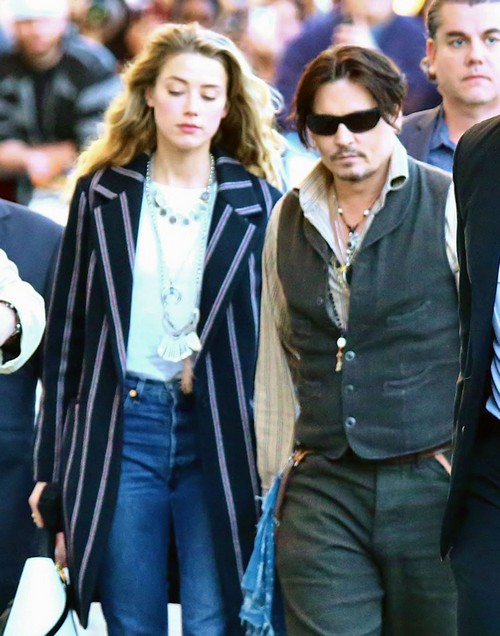 Johnny Depp and Amber Heard are supposed to have a wedding on his private island Feb. 8 but Vanessa Paradis won’t allow the children to attend. Johnny Depp and Amber Heard are getting married on his private island, after months and months of dilly-dallying. To be honest, it seems like the majority of their decision to finally get married is centered around media pressure, and because they feel obligated to do it. From what all of our sources are saying, Johnny Depp’s children, Lily-Rose and Jack, along with their mother, Vanessa Paradis still hate Amber Heard and considers her a talentless gold-digger. Don’t expect Vanessa Paradis to allow Johnny’s children to attend the wedding.

We’ve all seen that Johnny is going through a major mid-life crisis, and so I’m not going to go around hating on him for what he’s doing – getting drunk all the time, making slurry speeches, and getting married to a gold-digger half his age. But while his fans may be more forgiving, I highly doubt that Johnny Depp and Amber Heard are going to stay married – and soon, Johnny will realize what a big mistake he made. Mind you, not only in marrying Amber Heard, but dumping Vanessa Paradis to do so. I mean, who gets rid of the mother of their children [who’s age-appropriate, no less] and then rebounds with someone clearly using him to boost her own career?

Plus, Amber Heard is also very visibly ‘over’ the whole situation. She’s bored of Johnny Depp, she’s bored of babysitting him, and from what sources are saying, she’s regretting getting engaged to him. But at this point, how can she bow out without ruining all the hard work she’s already put in? A true gold-digger knows you have to see it through to the end, and Amber Heard is doing just that.

So yes, Johnny Depp and Amber Heard will probably end up getting married on his private island. But with Johnny’s kids absent from the ceremony and most of Johnny’s family absent from the ceremony, does it even matter? Johnny’s going through the motions, Amber’s going through the motions, and I think both of them know it’s a giant mistake but are too scared to pull the plug – or too lazy.