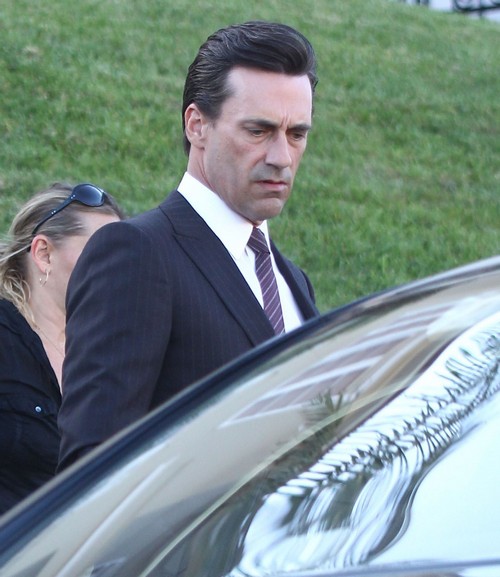 Mad Men star Jon Hamm and his longtime girlfriend of 18 years Jennifer Westfeldt have officially broken up. Jon and Jennifer had what was believed to be one of the most solid relationships in Hollywood – but in early 2015 it was revealed that there was trouble in paradise. Hamm confessed that his personal life didn’t stray far from his Mad Men character Don Draper, and he had been battling an alcohol addiction for years. Jon Hamm completed a 30 day treatment program just a few days before the final series premiere of AMC’s “Mad Men” this year, and he and Jennifer released a joint statement then asking for privacy while they dealt with the matter.

Just a few months ago break-up rumors plagued the couple, but Hamm’s rep insisted there was no truth to them, obviously that wasn’t true. According to People Magazine, Hamm and Westfeldt have officially called it quits – and there obviously was some validity to the reports that their nearly decade long relationship was over. On Hamm and Jennifer Westfeldt shared a joint statement with People Magazine, “With great sadness, we have decided to separate, after 18 years of love and shared history. We will continue to be supportive of each other in every way possible moving forward.”

It’s unclear what exactly sparked Jon and Jennfer’s break-up, you would think that their relationship would be stronger than ever seeing as how he just completed a rehab stint and is now clean and sober. So, there is a possibility that Hamm fell off the wagon and Jennifer said “enough was enough.” There has also been a lot of talk about pregnancy plans and speculation of whether the couple would start a family. Jon Hamm had made it pretty clear in interviews that he had no desire to have children – maybe Jennifer Westfeldt felt differently and it inevitably lead to their break-up. What do you guys think? Why did Jon and Jennifer split? Share your thoughts and theories in the comments below!