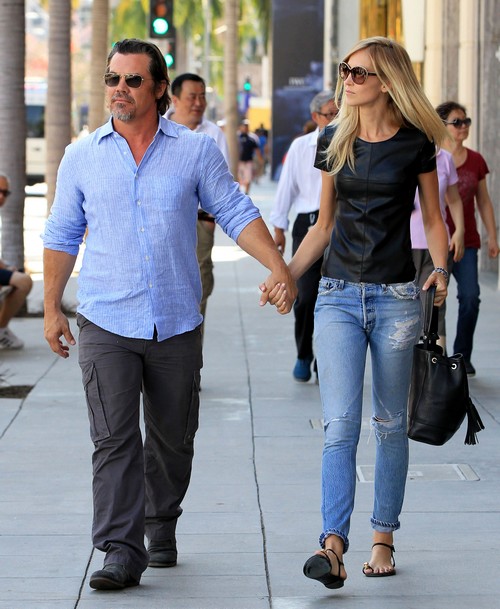 Josh Brolin is moving full steam ahead with his wedding to his alleged former mistress Kathryn Boyd – regardless of what his step-mom Barbra Streisand thinks about it. Kathryn and Josh stepped out as an official couple in 2013, the same month that Josh’s divorce from Diane Lane went public. Boyd had actually been working as Josh’s assistant since 2011 – leading everyone (including Barbra) to believe that he had been cheating on his wife with Kathryn all along.

Last month we reported that Barbra Streisand and her husband James Brolin had been fighting for months over his son Josh’s wedding to Kathryn. Per The National Enquirer, Barbra refused to support their marriage and was livid that James was not following her lead and choosing her side over his son Josh’s side.

According to the tabloid, Barbra was boycotting the wedding all together – and informed her husband James and step-son Josh that if he went through with their marriage, she would not be attending nor supporting them.

Apparently Barbra Streisand’s threats fell upon deaf ears – because Josh Brolin and Kathryn Boyd are just as happy as ever, and don’t seem to mind one bit the fact that Barbra Streisand doesn’t want them to be together. As a matter of fact, they were out in Beverly Hills on October 12 shopping together – and putting on some serious PDA for the paparazzi – knowing that once the photos hit the internet Barbra Streisand would be fuming.

We’re still not entirely sure what Barbra’s issue with Kathryn Boyd really is. According to the National Enquirer, she thinks that Kathryn is “a social climber who’s using Josh for his money and tinseltown connections.”

But, other than that what is Barbra’s beef with her? If she has been with Josh for two years and has stuck by him despite the fact that they still aren’t married – then it might be time to accept the fact that their relationship is the real deal.

What do you guys think? Will Barbra Streisand manage to derail Josh Brolin and Kathryn Boyd’s marriage? Why do you think she hates Kathryn so much? Let us know what you think in the comments below!

Josh Brolin is spotted walking hand in hand with his fiance Kathryn Boyd while shopping in Beverly Hills, California on October 12, 2015. Josh and Kathryn began dating in March 2013 after she worked for two years as the Josh’s assistant – by FameFlynet