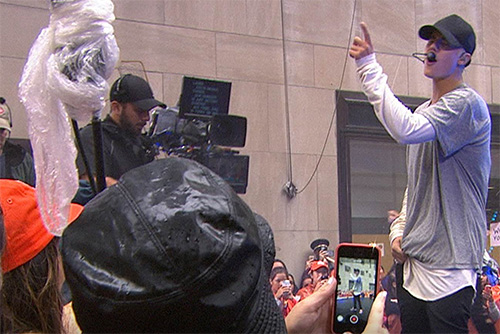 Justin Bieber took the stage at the Today Show on Thursday, September 10 to perform his hot new song “What Do You Mean.” Justin has been on a mission to prove his ex-girlfriend Selena Gomez and the rest of his doubters wrong – and so far his comeback is everything he promised it would be and more. Throughout Justin and Selena’s tumultuous relationship, SelGo made it very clear to Justin that his career was basically over and he would never be good enough for her – since he turned over a new leaf he is determined to prove his ex-girlfriend that she was wrong about him.

When the “What Do You Mean” music video made its world-wide debut, fans were shocked to see Biebs making out with Xenia Deli – in front of a wall with Selena’s name spray painted on it. Of course, Jelena fans were ecstatic over Justin’s not-so-subtle nod to Selena – and were certain that it meant the couple was getting back together. An insider close to Justin’s camp dished to CDL that Justin’s shout-out to Selena in his video was not because he missed her or wanted her back, it was actually intended as some major shade – he wanted her to know that he could get his life back on track and he was doing just fine without her.

Our insider explained, “Justin tried to change for Selena, this year they started hanging out again, and she dissed him and told him that he was nothing but an arrogant celeb who cared more about partying and hooking up with girls than he did his career and music. Then, she dropped him like a bad habit for Orlando. Justin has been on a mission ever since to prove Selena wrong, and all of the other haters. He doesn’t want her back, but he does want to rub it in her face that she didn’t believe in him, and he is doing amazing and tearing up the Billboard Charts now.”

And Justin is doing just that – he was presented with an award on the Today Show for being the youngest singer to have a single go straight to the number one spot on the Billboard charts. Check out Justin’s performance on the Today Show and let us know what you think of the new and improved Biebs. Does Selena regret not believing he was going to change and letting him go? Let us know what you think in the comments below!